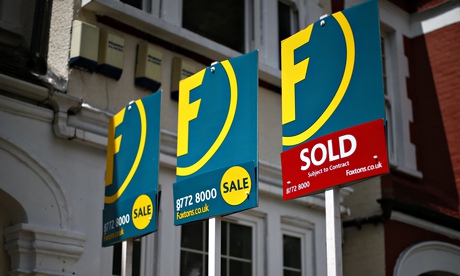 The International Monetary Fund has warned that a housing bubble could derail the UK's economic recovery, as it urged the government to consider reining in the Help to Buy scheme and called on the Bank of England to clamp down on risky mortgages.

The IMF also ended its row with George Osborne over austerity by describing the chancellor's deficit reduction plan as "appropriate" in its annual review of the British economy. Christine Lagarde, the IMF's managing director, admitted that the organisation had underestimated the strength of the UK's economic recovery and predicted that it would continue for the next few years.

But in the same week that the European commission expressed concerns over the domestic housing market, Lagarde added to the chorus of concern over the role of property in Britain's economic revival. Presenting the report in London on Friday, she said the UK needed to restrict high loan-to-income mortgages and reconsider the Help to Buy mortgage subsidy programme to prevent families becoming vulnerable to a collapse in house values or a surprise interest rate rise.

Responding to the review, the chancellor conceded that Britain must keep a close eye on rising house prices and indebtedness, but welcomed the IMF's overall endorsement. Osborne made clear that he expects the Bank of England to take action, which could include limiting mortgage ratios and recommending changes to Help to Buy, if it sees a housing bubble forming.

Osborne said: "I agree with Christine Lagarde that we need to be alert to the build-up of debt in the housing market. We need to be alert when we see house prices rising. I have given the Bank of England tools to do the job, and they should not hesitate to use those tools if they see these developments turning into a risk to the British economy."

Lagarde called on the Bank of England to deploy "macro-prudential" measures to address the financial risk, including potential caps on loan-to-income and loan-to-value mortgage ratios. Later this month, the Bank's financial policy committee (FPC) will announce whether it is taking action to cool the market in the wake of a warning from deputy governor Sir Jon Cunliffe that it was the brightest of "blinking warning lights" of risk.

Lagarde said action should be taken "in a gradual, flexible way" to see whether the measures worked. "Clearly it is something that needs to be watched and depending on circumstances, on pricing levels, those macro-prudential measures should be further activated if necessary."

Published in the same week that the Nationwide building society reported record average house prices, the IMF report said that the property market remained one of the major threats to the recovery, alongside poor productivity growth and the weakness of the banking sector. The withdrawal of low interest rates in the UK and the US could also undermine much of the progress made since the recession should it be mishandled by central banks and treasury policymakers, it said.

It said: "A steady increase in the size of new mortgages compared with borrower incomes suggests that households are gradually becoming more vulnerable to income and interest rate shocks."

Treasury officials are understood to be confident that restrictions on home loans will cool the market over the coming months without the need for a hike in interest rates.

Lagarde said the UK's mix of tax rises and spending cuts was "appropriate", but argued that the export sector remained weak and in need of a boost.

Osborne said the UK economy was "firing on all cylinders", but the coalition needed to "work through our plan to eliminate the deficit and move this country into surplus".

The IMF has voiced concern in the past over the UK's path out of recession. Last year, its chief economist, Olivier Blanchard, controversially accused Osborne of "playing with fire" by maintaining spending cuts as economic growth faltered at the time, with Lagarde's assessment on Friday confirming a full retreat from Blanchard's stance.

"I am happy to come back yet again and say that we had clearly underestimated the growth of the UK economy in our forecast a year ago," she said.

But the latest report said it expected the recovery to continue beyond next year, though not at the current rate of more than 3%.

Lagarde also used Friday's news conference to rule herself out of the race to be president of the European commission, insisting: "I am not a candidate." The possibility of her taking the EU's top job had reportedly been discussed by German chancellor Angela Merkel after David Cameron made clear Britain's opposition to the front-runner, Luxembourg's former prime minister Jean-Claude Juncker.