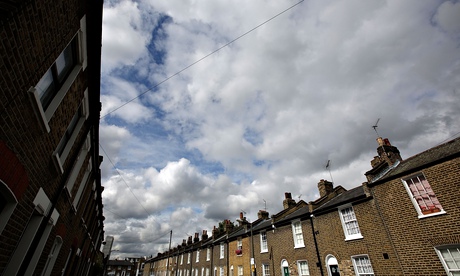 Higher house prices and a lack of supply is thought to be deterring new buyers from the market  as well as mortgage lending restrictions. Photograph: Matthew Lloyd/Getty Images

There are signs that the booming UK housing market could be cooling, with two sets of data showing a slowdown in demand from buyers in May.

The Royal Institution of Chartered Surveyors (Rics) said the number of new inquiries from househunters had fallen to its slowest pace since February 2013, while the number of homes coming on to the market had contracted for the fifth month running. Meanwhile figures from the UK's largest surveyor, e.surv, showed the number of house purchase loans fell to their lowest level for 11 months.

House prices rose to a record high in May, according to Nationwide Building Society's latest snapshot of the market, and Rics said higher prices, together with a lack of homes for sale and the introduction of restrictions on mortgage lending, had deterred new buyers from entering the market.

In recent months London has been powering the housing market, with some parts of the capital recording double-digit price rises, but Rics said demand from new buyers was starting to subside.

Inquiries from new buyers fell in May for the first time since January last year and more surveyors reported a fall in numbers than a rise for the first time in almost two years. At the same time, the number of sales agreed remained flat in the capital and the rest of the south-east.

Buyer inquiries were also down in the north of England and East Anglia, and Rics said there were some early signs that concerns over both supply and finance could be influencing the outlook elsewhere in the country. In the south-east, the proportion of surveyors expecting more sales over the next three months had fallen to 29% from 66% six months ago, while in the south-west it had dropped to 48% from 93%.

Surveyors who had been predicting that London would see price increases of 9% a year over the next five years had revised that down to just under 5%, while on a national level the forecast has edged down to 5%.

"Given the relationship between new buyer inquiries and new instructions on the one hand, and house price inflation on the other, this signals a slowdown in the latter over the next six to 12 months," it said.

The report, which comes days before the Bank of England's Financial Policy Committee (FPC) meets to discuss the UK housing market amid concerns of runaway price growth, suggested that mortgage lending rules that came into force in April have had a dampening effect on the market.

The changes, brought in under the mortgage market review, mean lenders have to undertake strict affordability checks before offering loans and Rics said anecdotal evidence suggested there had been a tightening in underwriting standards as a result. Respondents to the survey suggested average loan-to-values among first-time buyers had dropped to 85.3% from 86% in April.

Rics' chief economist, Simon Rubinsohn, said: "What we are really seeing is some of the very strong upward momentum starting to come off the housing market, as a lack of supply, higher prices, more prudent lending measures and some of the talk from the Bank of England are creating a level of caution among sellers and buyers.

"The most visible indicators of this are the revised downwards price expectations for the next 12 months and the flatter picture regarding new buyer enquiries. In particular, we're seeing the London market level off."

E.surv's figures, which are based on mortgage valuations it has undertaken and published data from lenders, showed a 3% fall in house purchase loans in May, despite a rise in the number of first-time buyers.

There were 61,202 house purchase approvals during the month  the lowest number since June 2013. However, first-time buyer numbers were up, and the number of loans to borrowers with a deposit of 15% or less was up by 40% year-on-year at 9,670.

Matthew Pointon, property economist at Capital Economics, said there were signs that demand from buyers was "beginning to lose steam  but that's not to say the housing market is grinding to a halt". Pointon added: "While the level of lending has dropped, there is no sign as yet that loan-to-income ratios are coming down from record highs.

"So while signs that the market is cooling could persuade the FPC to delay taking any action, we suspect they will act to at least stabilise loan-to-income ratios, probably by toughening up the interest-rate stress test."