After three years defending the deficit reduction programme, George Osborne doesn't want to see his plan foiled by a bubble 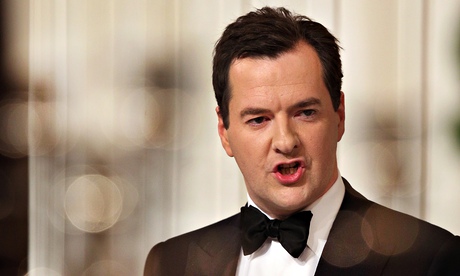 The Treasury insists the Bank of England's new powers to cap mortgages do not amount to an admission of error over introducing the Help to Buy scheme for first-time buyers.

Nor would the department dream of conceding that the intervention amounts to a wider complacency about the threat of a house price fuelled bubble wrecking the recovery.

George Osborne, freed after three years on the rack over the deficit reduction programme, is not a man who readily admits error. Vindication is the chancellor's preferred currency.

But the move does, at minimum, betray a nervousness about where house price inflation might take the economy, especially if, as the Bank governor warned yesterday, interest rates rise more quickly than markets expect.

The actual proposals set out are modest. Osborne will legislate to allow the Bank to "direct" limits to the amount of money people can borrow as a ratio of their salary or impose "loan to value" caps on the size of a mortgage, as a proportion of the purchase price.

Yet the Bank's financial policy committee (FPC) can already make "recommendations" for such limits, and it was unlikely that the Treasury would have asked to extend its powers if the Bank had disagreed.

That confirms the Bank is in the driving seat about tackling house price inflation.

Osborne's proposals could also affect those seeking to remortgage. Gavin Kelly of the Resolution Foundation thinktank said: "The regulators need to carefully consider what they would mean for the large numbers of people who already have mortgages who will be looking to refinance to insulate themselves from future rate rises."

The thinktank estimates that roughly 3.4m mortgages (about 38% of the total) are outstanding loans worth more than three times their net household income, meaning they could have difficulty re-mortgaging if a maximum threshold was brought in at this level. At a ratio of 3.5 times salary, the number drops to roughly 2.7 million.

Vince Cable, the business secretary, proposed on Thursday that the Bank set a cap on mortgages at a ratio of no more than 3.5 times of salary, as opposed to five times income being offered now.

But Cable's idea met with Treasury disapproval, and not just because it looked like a piece of pre-emptive credit seeking by Cable ahead of the Chancellor's Mansion House speech. A specific ratio set by ministers smacks too much of undermining the independence of the Bank. In London, where house prices average £450,000 and salaries average £35,000, mortgages set at 3.5 times salary could cripple the market.

But there are those around Cable who feel Osborne is being dragged on to his turf. After all, the terms of reference of the FPC were only set out a few weeks ago, and already they are being revised to underline the importance of preventing a bubble.

The Treasury has a battery of statistics from the Council of Mortgage Lenders to show Help to Buy has not been a factor in the London price boom.

In all, 94% of completions under Help to Buy are outside London and 74% of Help to Buy are new-build homes. The average house price to income multiple under the Help to Buy Mortgage Guarantee scheme is just over three times salary.

Moreover, the Treasury claims the house price boom has until recently been a London phenomenon. Excluding London and the south-east, UK house prices grew 4.7% in the year to March  in London they grew by 17 % in the same period.

Yet Cable and Labour have also argued that the Tories have repeatedly resisted addressing the underlying cause of house price inflation  the lack of housing supply.

Cable, still contesting to be the party's economics spokesman at the election, held a roundtable with the construction industry last week, and heard repeated calls for government to provide greater certainty.

The business secretary also succinctly set out the problems of the UK housing market: "The British people want our homes to go up in value, but also remain affordable; and we want more homes built, just not next to us."

Osborne has made the right noises setting a target of building 200,000 homes by 2020. In his main proposal, councils will be required to put local development orders on more than 90% of brownfield sites that are suitable for housing. It is a big change, but given the backlog, not in itself enough.