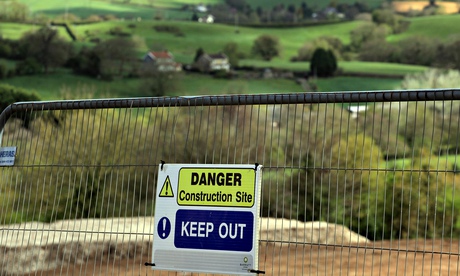 200,000 homes could be built on brownfield land by 2020, says chancellor
Brownfield land near Bristol that is being prepared for new houses to be built. Photograph: Matt Cardy/Getty Images

Chancellor George Osborne claimed on Friday that 200,000 new homes could be created by 2020 by accelerating development of disused industrial sites.

In the increasingly contested ground of housing policy, Osborne is proposing to order local councils to pre-approve planning permissions on 90% of suitable brownfield land by 2020. This will allow developers to start building sooner than otherwise, the Treasury argues.

The government will set aside an initial £5m fund to help local authorities create the first 100 sites with so-called local development orders and this fund could grow to £500m. The government wouldalso consult on a range of measures to enforce this approach, including allowing developers to apply directly to central government where councils have not done enough to remove planning obstacles on brownfield sites.

Osborne said: "This urban planning revolution will mean that in effect development on these sites will be pre-approved  local authorities will be able to specify the type of housing, not whether there is housing. And it will mean planning permission for up to 200,000 new homes  while at the same time protecting our green spaces."

Details of the new regime in London, first outlined in Osborne's Mansion House speech, were set out with the mayor of London, Boris Johnson. The two men proposed the building 50,000 new homes across 20 new housing zones in the capital.

In total, the Treasury and the Greater London Authority will provide £400m to help prepare brownfield land for development, and councils will be tasked with identifying and packaging together that land into housing zones.

The mayor will also have the power to call in developments of 100 or more homes where there are delays. Currently this is only possible on sites of over 150 homes. Five sites have already been identified, including Tottenham Hale in Haringey, Southall in Ealing and South Poplar in Tower Hamlets.

Johnson first set out some of the plans in his March housing strategy. The housing zones, similar to enterprise zones, will have lighter-touch planning and effective land assembly, including, where necessary, the use of compulsory purchase powers. There will be £200m of additional government funding available for 10 zones outside London with bids due to start at the end of this year.

Communities secretary Eric Pickles said: "We're determined to make the very best use of derelict land and former industrial sites to provide the homes this country desperately needs in a way that protects our valued countryside. By ensuring commitments to housing development are in place early and having dedicated housing zones, building becomes quicker and easier for homebuilders, businesses and councils."

The Treasury said the government will also look at how more housing can be built on existing estates. Research shows London's inner boroughs will contain 1.7 million fewer people than they did in 1911  despite record numbers of people expected to be living in the capital by 2021.

The mayor is suggesting developers can bid for a share of a £150m loan fund to invest in kickstarting and accelerating the radical regeneration of some of the country's most deprived social housing estates.

Johnson said: "Many of our estates date back to the 1960s and it is high time that they received a new lease of life. I urge developers to apply for the funding and get building."