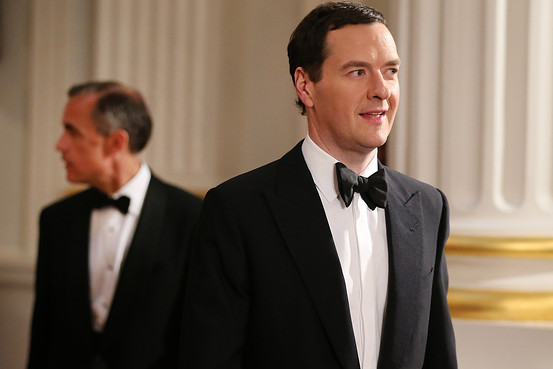 Chancellor of the Exchequer George Osborne, right, with Mark Carney, Governor of the Bank of England on Thursday. Getty Images

LONDONThe U.K.'s two chief financial-policy makers warned Thursday in strident tones that the British fervor for real estate had swelled into a threat to the wider economy, and the government moved to enact new powers to curb mortgage lending amid a gathering boom.

In twin speeches at a black-tie banquet for bankers and business leaders, Chancellor of the Exchequer George Osborne and Bank of England Gov. Mark Carney set out the danger signs of an incipient bubble: rocketing prices, lax lending and high debt.

Britain's concerns highlight a central challenge to policy makers in the era of low interest rates: how to prick bubbles early without sapping a tremulous recovery. The U.S. and euro zone have also established new bodies to keep watch over the financial system, but the U.K. has gone furthest in equipping its central bank with specific tools to tackle housing-market risks. 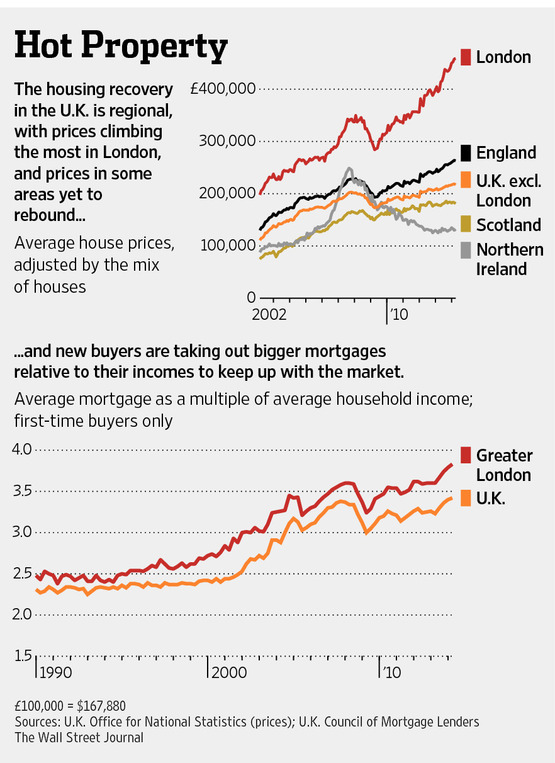 Britain's response will be a seminal experiment: the U.K. is trying to control housing prices through so-called macroprudential tools, without resorting bluntly to raising interest rates.

On Thursday, Mr. Osborne said the BOE would have wide new authority to restrict lending by limiting how much home buyers can borrow relative to their incomes and how much they can borrow as a proportion of a property's value. "I want to make sure that the Bank of England has all the weapons it needs to guard against risks in the housing market," Mr. Osborne said.

The International Monetary Fund warned Wednesday the U.K. was one of many countries that need to guard against housing-market booms, for fear a bust could lead to a systemic banking crisis. Australia, Canada and France were also highlighted as countries where housing markets appear overheated in relation to average incomes. The IMF said the U.S. market was less expensive now than historically, relative to average incomes.

Levels of tooth-gnashing in Britain have risen along with a deluge of data showing house prices at or above pre-financial-crisis levels.

It isn't the high prices alone that have policy makers worried. The property exuberance is stretching the finances of first-time home buyers and reshaping neighborhoods in London, the principal source of the boom.

Persistently low interest rates set by the BOE, alongside government policies intended to spur home buying, have sent prices soaring in the past yearespecially in the past six months. The low rates and galloping prices, in turn, have encouraged buyers to take on ever-growing quantities of potentially destabilizing debt to afford a house.

Gross mortgage lending in the U.K. in April was up 36% from April 2013. First-time buyers are stretching further: In London, they borrowed an average of 3.83 times their gross income in the first quarter, data from the Council of Mortgage Lenders show. That ratio last peaked at 3.6 in late 2007 and early 2008.

U.K. business secretary Vince Cable on Thursday said 3 to 3½ times a person's income is a "stable level." "I was appalled when I discovered that banks were lending five times," Mr. Cable said in a radio interview.

In London, prices are nearly double the national average. On Valentine's Day, more than 800 people braved rain, wind and the potential ire of their partners for the chance to buy an apartment.

The new residential towers, 7 miles east of the city center, won't be built for years. For now, the land is a windswept, postindustrial area. But with prices extraordinarily high, credit cheap and competition cutthroat, the deal on offer was tempting: £2,000 on a credit card to secure one of the 336 apartments.

Part-time property investors Ashwin Shah, 58, and his friend, Ashok Shah, 55, arrived hours before the doors of the hotel conference area opened. They were near the front of the line, and each committed to buying apartments, but not the coveted corner spots they wanted.

"It's a risk. Nobody knows where property prices will be in two or three years' time," said Ashwin Shah, who had been steering clear of London's high house prices. It was his first time back in the market since before the crisis, he said.

By the end of the night, 200 apartments had commitments. By Sunday, two days later, they all had.

Fierce demandexacerbated by decades of slow home-building that hasn't kept pace with population growthhas made London homes among the most expensive in the world. The average house cost £459,000 in March, up £61,000 in one year, and £109,000 more than the 2008 peak, according to the Office for National Statisticsthough some data suggest the most torrid growth rates are past.

The BOE's emerging fear is that buoyant prices will encourage property-loving Britons to load up on debt they may struggle to repay. Big debts are harder to service if interest rates rise and put borrowers and lenders at risk of heavy losses if prices fall. Such a squeeze could ripple through the economy, slamming the brakes on spending and lending and derailing the U.K.'s recovery.

The central bank has said it intends to raise its main policy rate gradually from a historic low of 0.5%; investors expect the first rise will come in the spring of 2015 amid stronger economic growth. Mr. Carney said on Thursday that rapid growth and tumbling unemployment mean the first increase may come sooner still.

Mortgage rates are expected to rise, too. Most Britons have adjustable-rate mortgages, or mortgages whose initial rate is fixed for a relatively short time. Even if house prices don't fall dramatically, borrowers will likely feel the pinch.

For some, the housing market feels precarious.

Late last month in Walthamstow, an area of east London often flagged as one of the capital's last remaining affordable neighborhoods, Emma Rubach, 36, was close to buying her first house. But the seller pulled out at the last minute because he couldn't afford another house he wanted to buy, she said.

Lloyds Banking Group was prepared to lend Ms. Rubach and her partner 4.5 times their combined salaries for a £327,000 home, she said. "The last house on that street sold for £240,000. We were going to be buying the most expensive house on the street. That made me nervous," she said.

And a government program called Help-to-Buy that subsidizes mortgages could also be scaled back when it is up for review in September, said Rob Wood, chief U.K. economist at Berenberg Bank.

Although the program accounted for just 1.3% of new mortgages issued between October and March, critics say it risks pushing up public expectations of future house-price gains, which could encourage reckless borrowing. Mr. Osborne said the program is working.

Like the U.S., the U.K. has had painful housing busts before, and officials have already taken some steps to cool it. A central-bank program funneling cheap cash to banks was rejigged last year, redirecting the money away from the housing market. Lenders in April were ordered to test more strictly whether borrowers could stomach a rise in rates. And regulators are requiring banks to check if they can withstand a collapse in house prices in stress tests later this year.

At the core of the U.K. housing-market problem is an acute lack of supply. Mr. Osborne also pledged reforms to the planning system Thursday aimed at providing 200,000 new homes. Similar home-building commitments over the past two decades have failed to keep pace with demand from a growing population.

For all its new macroprudential powers, that shortage of homes is what troubles central-bank officials. "We are not able to build a single house," Mr. Carney said Thursday.