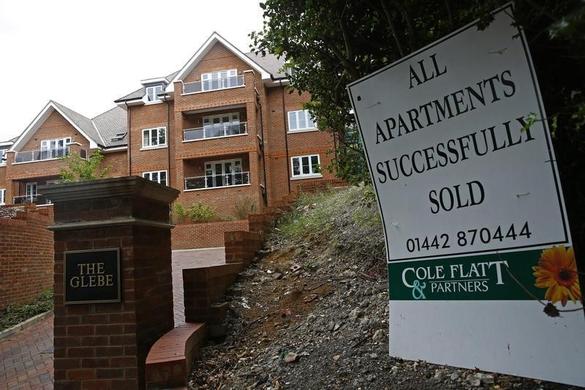 A sign is seen outside some newly built apartments in Berkhampstead, southern England August 13, 2013. REUTERS-Eddie Keogh


(Reuters) - The Bank of England looks set to take tougher action on Thursday than expected just weeks ago to rein in fast-rising British house prices, although a blanket limit on how much home buyers can borrow is seen as unlikely.

BoE Governor Mark Carney has warned that the housing market is the biggest domestic threat to financial stability, and on Thursday the British central bank is scheduled to make recommendations for lenders on how to reduce this risk.

The spotlight on the BoE has intensified after finance minister George Osborne said this month he would grant it legal powers to ban banks from lending more than a certain multiple of a borrower's income or of the value of a house.

That means that in addition to imposing more stringent mortgage affordability requirements, the BoE may urge banks to limit riskier lending.

But an immediate cap on all high loan-to-value or loan-to-income mortgages looks less likely, given Carney's commitment that the central bank's Financial Policy Committee would act gradually as well as early to rein in housing risks.

"The tone will reflect an increased concern on the FPC around the risks from the UK housing market. We've seen one or two hints in that direction from the Governor," said James McCann, UK and European economist at Standard Life Investments.

"Previously Carney would emphasise, we don't set policy for within the M25," McCann said, referring to the motorway that circles London. "Now I think he has seen more signs of a broader, a more pronounced, a more regionally consistent rise in UK housing market activity."

Britain's housing market has recovered rapidly thanks to record low interest rates, low unemployment and government schemes, with house prices up around 10 percent annually and by nearly twice as much in the capital.

Pending Osborne's pledge to give it legal powers to stop lenders from issuing mortgages that are too big compared to borrowers' incomes or the value of their home, the BoE can only advise banks not to do so.

Economists in a Reuters poll said the BoE was most likely to cool the housing market by capping the size of mortgage loans relative to income, seen as the more radical option, although respondents were divided on the most likely policy action.

"The straight cap is a bit blunt, but what we thought might be more likely is to enact something that mimics what we have already seen from a couple of the banks - so recommending loan-to-income caps for the larger-sized mortgages," Morgan Stanley economist Melanie Baker said.

Lloyds Banking Group (LLOY.L) and Royal Bank of Scotland (RBS.L) have both said that for loans over 500,000 pounds, they will no longer give mortgages of more than four times a borrower's income.

Until recently, the FPC had been expected to adopt measures which affect home buyers less directly, for example by requiring banks to hold more capital against residential mortgage loans.

Lowering the ceiling for properties qualifying for the Help to Buy scheme, under which the government guarantees higher loan-to-value mortgages, and placing caps on mortgages relative to the value of properties are considered less likely.

The first is seen as politically sensitive ahead of 2015 elections and would have little effect on the overall market, as Help to Buy has had only limited take-up so far.

Limiting banks' ability to issue high loan-to-value mortgages at a time when the government is guaranteeing them for some borrowers would appear contradictory, analysts said.

"It's a little bit like having the Treasury with their foot on the accelerator from Help to Buy and the FPC having to put on the brake," said Societe Generale economist Brian Hilliard.

Even if the BoE uses its new macroprudential tools it is still likely to raise rates later this year or early next year.

Carney caught markets off-guard in June when he said rate rises could come earlier than they expected, prompting investors to bring forward rate hike bets to 2014 from early 2015.

He said on Tuesday his speech was motivated by the fact that markets had not responded to a run of strong economic data.

But its timing, before the release of the financial stability report, surprised some analysts. They had expected the central bank to wait and assess the impact of Thursday's measures before deciding on interest rates, especially as the BoE had said it would use macroprudential tools to tackle any housing overheating and raise rates only as a last resort.

SG's Hilliard sees this as a change in tone which raises questions about the Bank's broader message.

"In a way it comes back almost to the classical perception of monetary policy, that if you have a housing problem you raise interest rates," he said. "We had a fairly clear separation between the roles of the Monetary Policy Committee and the FPC, but now it's becoming a little bit more clouded."