U.K. House Price Grumbling Isnt What It Used to Be 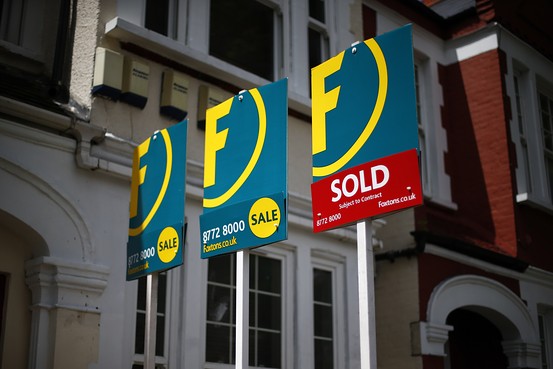 Estate agents boards are lined up outside houses in south London June 3, 2014.  Reuters
The booming cost of homes in the U.K. this year has turned moaning about unaffordable neighborhoods into a national pastime.

But lately signs are emerging that theres increasingly less to moan about.  House prices rises appear to be flattening out, not just in frothy London, but across the U.K.

A survey of 1,500 U.K. households  conducted by real-estate broker Knight Frank and data-firm Markitshowed Friday that people believe house prices rose less in July than June, and expect prices will continue to ease.

Around one in 13 households expect that the value of their home will have fallen by July next year, the highest proportion since December last year, said Gráinne Gilmore, head of U.K. residential research at Knight Frank.

And a monthly survey from the Royal Institution of Chartered Surveyors last week found its respondents expect house prices will continue to increase in London, but at their weakest pace since March 2013. Data from U.K. lender Halifax last week also suggested the market looks to be stabilizing.

It seems likely there will be some slowing in the UK housing market, said Stephen Rees, head of real-estate advisory at U.K. bank Coutts. However, this is still a far cry from a reversal of the generally-rising trend in UK house prices, Mr. Rees said.

The latest official government data show U.K. house prices rose 10.5%  in May from the year earlier, and in London prices were up by over 20%.

In spite of the weakening tone, worries havent abated.

Just this week, Bank of England policy makers warned about the risks the real-estate market poses to Britains economy while addressing the Treasury select committee. And last month the U.K.s two premier financial policy makersChancellor of the Exchequer George Osborne and Bank of England Gov. Mark Carneysaid real estate was right now the biggest risk to the wider economy.

Their concern is not just high prices, but that people desperate to get on the housing ladder will take out mortgages reaching far beyond their incomes, quickly finding themselves in financial difficulty, particularly if, as it is expected, the BOE raises interest rates sooner rather than later.

For the central bank, the dangers arising from an over-heated property market remain.