The mayor of London described rising house prices in the capital as a scourge and a blight that is causing misery for millions of Londoners not on the property ladder. 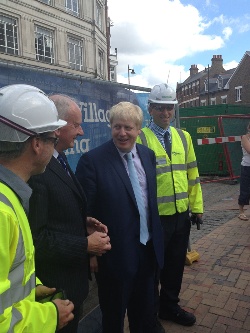 Speaking to Inside Housing, Boris Johnson said the only solution to the problem was to build more homes in the capital. Listen to the full conversation below.

This comes just days after the Ofice for National Statistics revealed that house prices had risen in London by 20% between May 2013 and May 2014.

He said previous comments describing high house prices as a good problem to have, simply reflected the economic success and desirability of living in London.

Rising house prices are a scourge and a blight if youre not on the property ladder, and they are causing misery, the mayor said.

But what they reflect and what I was trying to get at there is the economic success of the city the desirability of living in London.

If you asked people whether they wanted their house price to fall by 30% or 40%, I think most people would say no because a lot of people they have their equity and their aspirations tied up in their property values so its a very difficult problem to solve.

The only long-term solution is to help everybody who cant get housing to get the homes they need.

House price rises in the capital have often been linked to increased demand as a result of chancellor George Osbornes Help to Buy scheme.

Speaking at an event in Bromley, Mr Johnson also said he was following the numbers of homeless households forced out of London by benefit very closely.

The mayor has previously warned against turning London into a city such as Paris where the less well-off are pushed out to the suburbs.

We have got a long way to go before the kind of scenarios I talked about come to pass, he said.

We are following the numbers very closely It is vital for the future of our city that London remains full of mixed communities everywhere.