By Andy Bruce and William Schomberg 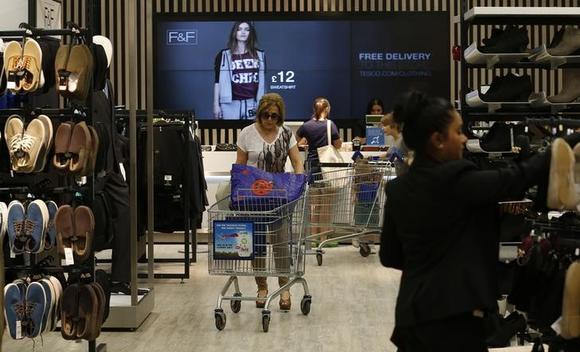 Customers shop in the F&F clothing department at a Tesco Extra supermarket in Watford, north of London August 8, 2013.

Customers shop in the F&F clothing department at a Tesco Extra supermarket in Watford, north of London August 8, 2013.

(Reuters) - British inflation surged to a five-month high last month and house prices rose at their fastest rate in years, prompting investors to increase bets on an interest rate rise before the end of 2014.

Underlining the challenge facing the Bank of England as it tries to manage Britain's accelerating economic recovery, consumer prices rose 1.9 percent on the year in June, official ONS data showed.

The jump from a four-and-a-half-year low of 1.5 percent in May far outstripped forecasts for only a slight rise, according to a Reuters poll of economists.

Separate figures showed the real estate market also picked up speed as London property prices leapt by a record 20.1 percent over the 12 months to May.

Speaking after the data - which brought consumer price growth close to the Bank's 2 percent target - BoE Governor Mark Carney said inflation expectations were "extremely well anchored" and had improved over the last year.

"I am aware of today's CPI number, but I would only draw attention that in (our) May forecast, inflation returns to target at the end of the forecast horizon, only gets back to 2 percent three years out," Carney told lawmakers.

Consumer price inflation in Britain had been largely declining over the last year, helping the BoE to hold off on raising interest rates despite Britain's surprisingly strong economic recovery.

But British government bond prices tumbled after the data and sterling rose as markets grew more confident that the BoE could raise rates before the end of the year.

"The amount of spare capacity in the UK economy is being eroded," said ING economist James Knightley. "Given the BoE is targeting inflation in two years' time, not what it is doing right now, we now favour a rate hike in November."

The largest contribution to the year-on-year increase was from clothing and footwear prices - which did not fall as usually occurs in June, when summer sales tend to start.

An official from the Office for National Statistics said there were signs that good weather last month may have deterred retailers from cutting prices. Elizabeth Martins, an economist with HSBC, said the clothing effect was likely to be smoothed out in July's data.

"The June numbers represent an abrupt halt to a first half in which inflation has, by and large, come in below expectations but it is too soon to conclude that the UK's disinflationary trend is turning," she wrote in an email to clients.

Before December last year, annual inflation had exceeded the BoE's 2 percent target every month since December 2009, eroding the spending power of households and making falling living standards a big political issue ahead of next year's elections.

A think tank report on Tuesday showed young Britons' incomes fell almost twice as much as those of older people in the five years after the financial crisis.

Separate data from the ONS showed house prices in Britain rose 10.5 percent in the year to May.

While other more recent surveys suggest rapid growth in house prices has started to cool a little, the ONS figures were a reminder that momentum remains strong.

In his appearance before lawmakers, Carney reiterated his belief that the housing market is the biggest risk to Britain's economic recovery, and one of his colleagues highlighted the limits of the Bank's power to temper rapid house price gains.

"I do think there is an issue on the relentless upward pressure on house prices but it is not one the (bank's) Financial Policy Committee can really address," said Donald Kohn, who sits on the committee.

Excluding London and the south east, British house prices rose by 6.4 percent in the 12 months to May, the highest in nearly four years.