Potential property investors into the central London market are getting cold feet as talk of a mansion tax crescendos Photo: Alamy

House price growth in the commuter belt of Greater London is expected to outstrip the capitals central boroughs over the second half of the year, research suggests.

Property group JLL has forecast price growth of 13pc over the next six months for homes on the outskirts of the city and in the sprawling suburbs within the M25.

However, values in the affluent central London boroughs of Knightsbridge, Mayfair, Kensington, Chelsea and Belgravia are also predicted to edge up by 3pc until the end of the year, and 4pc in 2015.

In the aftermath of the recession, developers concentrated on building luxury homes in Londons central boroughs to capture both overseas and domestic buyers.

This supply of new-build homes along with second-hand property coming to the market has helped to balance demand, dampening the runaway house prices seen in the capital over the past year.

The forthcoming election has cooled demand for luxury homes worth more than £2m, with Labour and the Liberal Democrats suggesting a mansion tax. Demand will drop for homes in that bracket, the report found.

The London housing market has found a new equilibrium which remains robust, but perhaps a little less frothy than it has been, said Adam Challis, head of residential research at JLL. We have forecast price growth in the South East commuter belt well ahead of the rest of the UK  due to an overweight of demand . 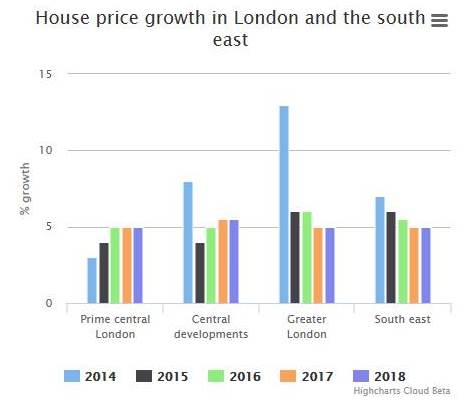 It's not all about London

The report finds that 86pc of sales occured outside the capital and price growth rates of 2.2pc in the north-west, 5.4pc in the south-west and 6.4pc in East Midlands to June

"In short the house price bubble is simply not a reality for most of the UK. They are only modestly above average and are typical of a recovery cycle where demand is moving ahead of the supply response in both the new-build and second-hand markets," said Mr Challis.

"It is in this context that any moves  or lack of  by the Bank of England need to be considered. With the majority of households in the UK only seeing a modest improvement in the value of their homes over past year, after five years of weak or falling prices, efforts to cool the national housing market recovery seem heavy handed and premature."