Despite signs of cooling, house prices before the summer break continued to climb 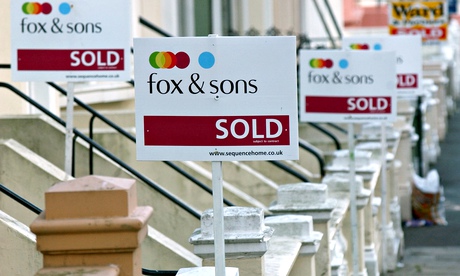 Property prices, particularly in the south-east, continued to rise in June, according to the ONS. Photograph: Toby Melville/PA Archive/Press Association Images

Official figures have provided further evidence that runaway house price rises have begun to slow, as the rate of annual growth cooled slightly to 10.2% in June.

The Office for National Statistics data showed the annual growth rate had fallen from 10.4% in May, but prices rose by 0.5% on the month to a record £265,000 for the average property.

Although recent figures from the Council of Mortgage Lenders suggest first-time buyers have been re-entering the market, campaign groups warned that homes were getting further out of reach for those forced to rent. 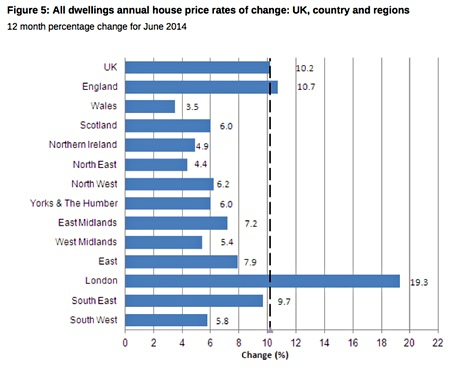 Alex Hilton, director of Generation Rent, said: "The average private renter effectively spends two days every week working to pay off their landlord's mortgage, and with prices rising at this rate, fewer renters will ever escape this trap.

"We need to build many more homes to bring supply back in line with demand, and those of us who are stuck with the insecure private rented sector for the foreseeable future need better rights and the ability to call the place we live a home."

In recent days, estate agents and surveyors have reported that the market has started to cool in some areas, as more properties have come up for sale and the balance of supply and demand has tipped in favour of buyers.

Rightmove's latest report said asking prices dropped for the second month running in August, while in London they were down for the third consecutive month.

The ONS index, which is based on completed mortgages, and so lags this data, showed prices had risen in all regions of the UK since June 2013. The biggest increases were in England, where the average price reached £276,000 and the index was higher than its pre-crisis peak in 2008. This has been driven by growth in London, the south-east and east of England, where prices have reached record levels.

"House prices are increasing strongly across most parts of the UK, with prices in London again showing the highest growth," the ONS said.

The housing charity Shelter said the increases were another blow for people stuck in rented accommodation. Its chief executive, Campbell Robb, said: "From a new generation of part-rent part-buy homes, to encouraging smaller builders back into the market, there are ways to fix this country's housing crisis. If we don't see radical action soon, more and more people will be left without a hope of ever building a stable future in a home of their own."

Brian Murphy, head of lending at the Mortgage Advice Bureau, said: "Tighter lending regulations and the summer slowdown have started to inject a double dose of reality into the housing market, with the rate of price rises outside London and the south-east far lower than the UK average.

"Nevertheless, the slowing of growth between May and June has been modest at best. The latest ONS figures suggest we have passed the point of seeing a higher rate of increase every month  temporarily at least  but demand for home ownership remains strong and will help to uphold prices for the foreseeable future."