Thousands of households stretched out their mortgages over 30 years or more in the second quarter, as soaring house prices forced record numbers of borrowers to saddle themselves with more debt for longer

One in five of the 171,000 new loans taken out between April and June were for terms of more than 30 years Photo: Alamy

A record number of people are being forced to take out 30-year mortgages as the result of spiralling house prices.

One in five of the 171,000 new loans taken out between April and June were for terms of more than 30 years, compared with 18pc of 148,000 loans in the first quarter, according to the Council of Mortgage Lenders. 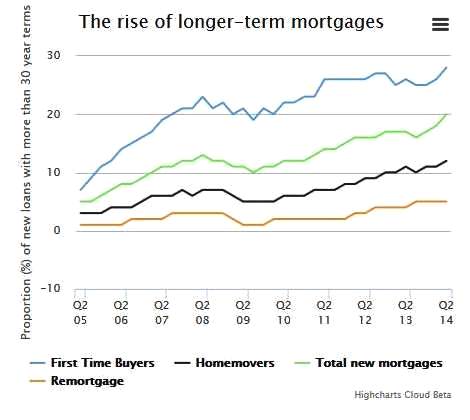 The CML said the number of first-time buyers taking out a mortgage with a longer repayment period jumped to 28pc of all new loans, from 26pc in the first quarter. Ten years ago, just 4.5pc of all borrowers took out loans of more than 30 years, rising to 11pc at the end of 2007, before Northern Rock collapsed.

The CML said borrowers were finding it harder to meet monthly mortgage payments as a result of rising house prices and the prospect of higher interest rates, while tough new affordability rules were also pushing borrowers towards longer loans than the traditional 25-year term.

The quarterly data, which were the first since the Mortgage Market Review (MMR) came into effect on April 26, showed a 4,000 jump in the number of longer loans to 22,600 in the second quarter compared with the first three months of the year.

In the four quarters before the MMR came into effect, the number of first-time buyers who took out loans of 30 years or more averaged 18,175. This suggests that a growing number of borrowers are spreading their payments over longer terms in order to lower their monthly payments and comply with the new rules.

Extended mortgage terms are often seen as a sign of a property market under stress. Irelands pre-crisis boom saw an increase in mortgage terms of 30 and 35 years, while Mark Carney, the Governor of the Bank of England and former Bank of Canada boss, worked with policymakers to reduce mortgage lengths from 40 to 25 years to cool Canadas housing market. Longer term loans leave borrowers more vulnerable to house price falls, and adds thousands of pounds more in interest to a buyers mortgage debt.

Bank policymakers have warned that longer mortgage terms put borrowers at greater risk of being forced out of their houses if they fall behind on their payments.

Andrew Bailey, the deputy governor of the Bank of England, told MPs last month that longer-term mortgages could leave people exposed once they hit retirement age.

We have to watch this very carefully, because if mortgages extend beyond the point at which peoples income falls off, then we have a long-term problem, he said.

The CML data showed that more people over the past year had remortgaged their homes with a loan that stretched out for more than 30 years. Almost 5.5pc of all remortgages in the second quarter were taken out for lengths of 30 years or more, suggesting that some borrowers are rolling out their debt well into retirement.

Ray Boulger, senior manager at John Charcol, said a decline in interest-only mortgages and other products designed to keep costs down had led to longer mortgage terms.

Back in the Eighties and Nineties, lenders and insurers came up with different ways to keep the costs down, such as low cost endowment and deferred interest mortgages. Those products arent available today so stretching terms out is the obvious way of doing that.

Mr Boulger said rising mortgage terms were not necessarily bad for borrowers. People still automatically think a mortgage should be 25 years. Thats not the right way to approach it. One should look at whats affordable. Youve obviously got to recognise that the interest costs will be higher with a longer mortgage, but if the alternative is renting, youll probably be paying at least as much and maybe more, but end up with nothing to show for it at the end of the day.

HSBC offers mortgages with terms of up to 30 years, while Halifax and Nationwide will lend for terms up to 40 years.