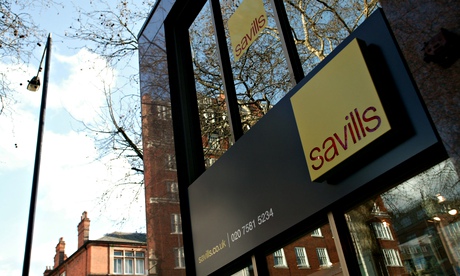 UK house prices will end the year 9.5% higher than they started it, but the strength of increases this year means that in London the market could flatline in 2016, property firm Savills said on Tuesday, as it revised its forecasts for the next five years.

The firm had predicted a 6.5% increase in prices across the country in 2014, but said that growth had exceeded all expectations. As a result it has revised up its forecast for the current year, and its prediction of total growth by the end of 2018 to 25.7% from 25.2%. Its five-year forecast assumes mortgage rates will have risen to an average of 5% by 2018.

In London, where the major house price indices all showed annual growth of around 20% at the start of the summer, Savills said it expected the rate over the year to hit 15%, far in excess of the 8.5% it had originally forecast.

However it said strong growth this year has left less capacity for further mid-term growth in some markets. Despite this years strong performance, it has left the five-year forecast for London unchanged, at 24.4%, and revised down that for and the wider south-east from 31.9% to 31.6%.

In London, Savills said it now expected prices to grow by 5% in 2015, down from a forecast of 6%, and to remain flat throughout 2016, rather than recording a 4% increase as it originally predicted.

The firm said over the five years to the end of 2018 it still expected prices to rise more quickly in the south-east and east of England than in the capital as evidence mounts of the flow of buyers and equity out from the capital. It added: The midlands and the north have the potential to outperform thereafter, as has been seen in previous cycles.

Savills UK head of residential research, Lucian Cook, said house prices had been underpinned by record low interest rates, rising loan-to-income lending and pent up demand from buyers re-entering the market as the economy and consumer sentiment have improved.

However, he added: These extraordinary rates of house price growth cannot continue in the current, more regulated mortgage environment, particularly in the face of likely interest rate rises.

Research by Savills suggests that the total current cost of mortgage interest among owner-occupiers in Britain stands at £33bn and that a 2% rise in interest rates would add £2,360 to the average annual mortgage bill across England and Wales, and £4,000 in London.

Higher interest rates would increase the risks in sectors of the market where borrowers have taken on high levels of mortgage debt relative to income, but it is difficult to see this as a catalyst for a wholesale housing market correction, rather we anticipate a slowing of growth, particularly in London and the south, says Cook.

Separate figures from researchers at Knight Frank show that the value of land suitable for development in England and Wales increased by 2% in the first half of 2014.

In London, where pressure on land is at its greatest, Knight Frank said the cost of land had recorded double-digit growth since the second quarter of 20013. In prime parts of London, development land went up by 18.9% while across Greater London prices rose by 14.2%.

Research by the firm showed that renting households currently pay more for their housing than those with repayment mortgages, at £9,567 a year versus £8,403, and that even social housing tenants are paying more than the average interest-only element of mortgage payments.

Savills said it expected higher mortgage rates to push up the cost of owning by more than a quarter over the next five years, but there was still a big discrepancy between what someone able to access a mortgage is getting for their money versus the dead costs of renting.

If, by pension age, ownership is mortgage-free, the saving on rent over the average 20 year duration of retirement is worth £191,340 to the average UK household, Savills said.