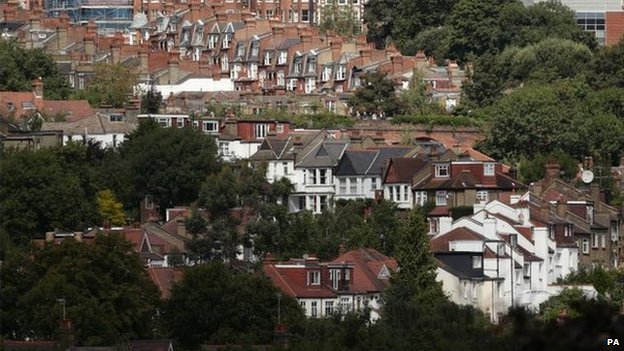 House prices edged up in August, according to the UK's biggest building society, the Nationwide.

Prices increased by 0.8% over the month in August, compared with a 0.2% rise in July, when house prices moderated.

Monthly figures can be volatile, but the annual figure also rose in August, from 10.6% to 11%.

The average house price across the UK is now £189,306, said Nationwide. The figure has not been seasonally adjusted.

The annual pace of house price growth is still below the 11.8% recorded in June, but "continues to outpace earnings by a wide margin", said Nationwide chief economist Robert Gardner.

Average wage growth has been running at less than 1% in recent months, he said.

"Nevertheless, at a national level, housing affordability does not appear stretched by historic standards, in part due to the low level of mortgage rates," he said.

Mortgage approvals dropped between January and May, but then rallied, he said. It was unclear how much tougher home loan rules - called the Mortgage Market Review - had an impact on the slowdown, he added.

In July, the Bank of England said that mortgage approvals were back on the rise, and earlier this month, lenders said that affordability checks had put only a "gentle dampener" on the UK mortgage market.

Mr Gardner added that widely anticipated interest rate rises expected in the first quarter of 2015 were likely to be gradual.

Nationwide's figures, based on its own mortgage data, are the first to estimate the state of the market in August.

Mark Harris, chief executive of mortgage broker SPF Private Clients, said: "August proved to be a decent month for the housing market, even though it is traditionally a quiet time of year when not much gets done."

Other surveys had suggested that house price growth had been moderating earlier in the summer.

The latest data from the Office for National Statistics (ONS) showed that annual house price inflation stood at 10.2% in June, compared with 10.4% in May.

The rise was again driven mainly by London, where house prices increased by 19.3% over the year, a slight drop from the previous month's figure.

Figures from the Land Registry, also published on Friday, suggested that prices were higher in every region of England and Wales in July than they were a year earlier.

The slowest annual rises were in the North East of England (up 2%) and Yorkshire and the Humber (up 3.1%).

Campbell Robb, of chief executive of Shelter, said: "This is yet another heavy blow to those who are working hard and saving hard, but still a world away from being able to afford a home of their own.

"Instead they are finding themselves either caught in the 'rent trap' or facing living with their parents well into adulthood."