The students happy to pay £1,000 a week to rent a flat in central London 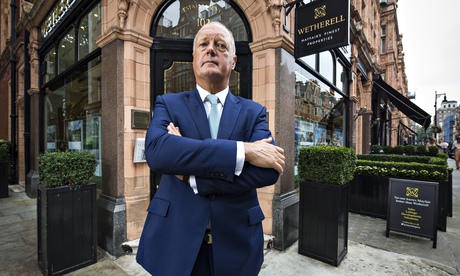 Estate agent Peter Wetherell outside his Mayfair office. He says there has been a big rise in 'silver-spoon students'. Photograph: David Levene

There is a new breed of students in town and they're looking for accommodation just a little smarter than your average digs.

Rich offspring of Middle Eastern royals, Russian oligarchs, African heads of state and super-rich east Asian businesspeople flooding into Britain for the start of university term are prepared to pay so much for flats in the swankiest parts of central London  Mayfair, Knightsbridge and Kensington & Chelsea  that agents say they have now replaced bankers as the most common tenants of the most expensive flats.

Naomi Heaton, chief executive of London Central Portfolio, which owns and manages a swath of more than 500 properties across Mayfair, Belgravia, Knightsbridge, and Kensington & Chelsea, said students are now the firm's biggest market, occupying 41% of its properties at an average of £600 a week  or more than £2,500 a month.

For most students, a place in a standard London hall of residence  about £170 a week, with six evening meals included  seems eye-wateringly expensive. But Peter Wetherell, managing director of Wetherell estate agents on Mount Street in the heart of Mayfair, said there has been a "big upswing in silver-spoon foreign students" this summer, and 35% of all his flats in the £750- to £1,000-a- week bracket are now rented by students.

"They're nearly all from the Middle East, India, the rest of Asia," he said. "They're coming here to study and they want be in a secure, luxury environment." Wetherell said students, or their parents, spending more than £2,000 a week  £104,000 a year  are not uncommon: "It comes with the territory of their families, they want all the facilities: the equivalent of a luxury hotel suite."

Lucy Morton, a senior partner at WA Ellis in Knightsbridge, says most foreign students want one-bed flats at up to £1,000 a week and they often pay the whole year's rent up front. The summer months are the boom time for letting: "All the one-bed stock is being diminished. We tell owners 'If you have a good one-bed flat in central London you should really let it in the summer when the students are over.'"

Morton said the students want to live "as close to where they're studying as possible ... Lots of them here are going to Imperial College". That means substantial demand in South Kensington, where the average price of a flat, at more than £1m, is the highest in the UK. Flats on or just off Brompton Road, allowing easy access to Harrods' food hall, were the most popular, she added.

The agency is currently showing students around a two-bed second-floor flat in Egerton Terrace, SW3, on the market at £1,100 a week. Among the cheapest properties, for overseas students of more modest means, is a £275-a-week bedsit in Egerton Garden Mews, but it's so small tenants will have to climb a ladder to get to the "raised bed area".

One of WA Ellis's recent clients, Yassine, admitted the £595 a week he was paying for a flat just off Sloane Square, was "quite expensive". But he added: "I really enjoy it, I love Chelsea. The Kings Road is my favourite place, and it's like, 20ft from my place."

Yassine, who declined to provide his surname, is the son of a Parisian jewellery designer and a "not that famous" French artist. He is about to start the second year of a maths with finance degree at Kings College London and is sharing with his sister, who starts at UCL this month.

"Lots of my friends live in flats; the majority of them, actually," he said. "Some were looking in Notting Hill, but they couldn't find anywhere affordable. You can get a good deal in Chelsea."

In Mayfair, at the Wetherell office, opposite the Christian Louboutin and Balenciaga boutiques and with a Bentley and a Lamborghini parked outside, they are used to students popping in but are not keen to introduce any of them to the Guardian. "At this end of the market, people are very secretive," Wetherell's letting manager, Darran Simmons, said as he began a tour of properties popular with students. "They are, you understand, under threat of kidnap in some countries."

In one block managed by Wetherell almost half of the 16 flats are occupied by students. Rents for flats in 65 Duke Street  which runs down the side of Selfridges  start at £1,500-£1900 for a very compact studio and go to £3,350 a month for a two-bed flat.

"We are forever letting flats to students in this building," Simmons said. "It sounds ridiculous, but they're very affordable for the area."

Mana Rana, the Filipino doorman of 39 Hill Street, which neighbours the two-Michelin-starred restaurant The Greenhouse, said the block used to be mostly occupied by bankers, but was now host to mostly students, predominantly from the Middle East and studying at the London School of Economics (LSE). Rana said he had never had to deal with any unruly raves or even a late-night student party. "They're very studious." Three streets away on Curzon Street, which links Park Lane with Berkeley Square in the heart of Mayfair, Wetherell has got an air-conditioned split-level two-bedroom flat on the market for £2,000 a week, recently vacated by students.

The most expensive student let Simmons has arranged is a £15,000-a-month two-bed apartment on Mount Street, where local facilities include the Marc Jacobs store and Scott's restaurant, popular with rich and famous diners such as Simon Cowell and Charles Saatchi. But estate agency gossip, he said, suggested a Saudi prince was paying £7,000 a week for a penthouse on Park Lane .

"I don't have £3,000 to spend, and I never will," Simmons said. "If you're a regular working guy it's quite hard to get your head round those kind of numbers. I'm from Sutton Coldfield and people can't even imagine it when I tell them."

While many clients spend weeks or months deciding which property to rent, others are much more decisive. Last year, a senior African minister walked into the Wetherell office unannounced and asked Simmons to "take me to see three of your best properties; I will pick the best one for my son today". He chose a flat that cost £600 a week. "He said he didn't have time to mess around, and he did the paperwork there and then and paid a year's rent up front." That's £31,200.

Another memorable client was the owner of a Dutch jewellers, flat-hunting with his blazer- and cravat-wearing 19-year-old son. Simmons was struck by the cravat, but also by a third man hovering in the doorway during viewings. "He never said anything and I kept wonder who he was, so I went up to him and said 'Hi, I'm Darran.' It turned out to be the butler."