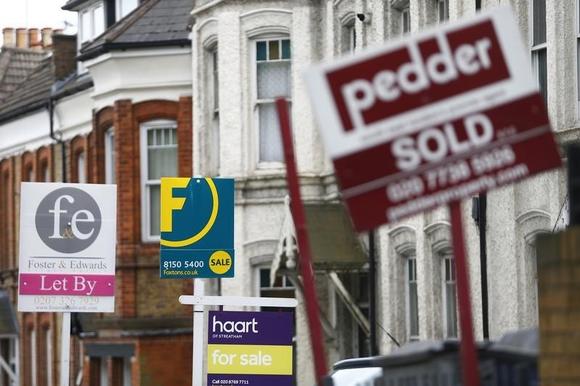 (Reuters) - British house prices rose at the slowest pace in a year during August, according to a survey on Thursday that suggested speculation about higher interest rates has dampened buyer confidence.

The Royal Institution of Chartered Surveyors' monthly house price balance fell to +40 last month, its lowest level since last August, and falling short of forecasts for +47 in a Reuters poll of economists. July was revised down slightly to +48. Agreed sales fell for the first time since September 2012 and there was a second consecutive fall in buyer inquiries.

"Some of the momentum has come out of the housing market of late reflecting in part concerns over a likely rise in the cost of borrowing at some point in the not too distant future," said

Bank of England Governor Mark Carney said on Tuesday the Bank of England may start to raise interest rates next spring if the labour market continued to recover from the financial crisis.

The RICS survey of chartered surveyors added to evidence that London's housing market is cooling off after fervent price growth earlier this year. The London house price balance eased to +9 in August from +11.

better balance with demand, and in the process, taking the edge off price gains," Rubinsohn said.

Other surveys paint a mixed picture of the housing market, which Carney has described as the biggest domestic threat to Britain's economy.