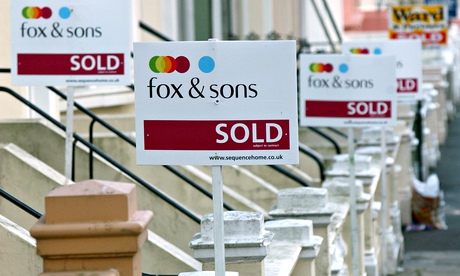 The strong pace of UK house price growth cooled off in August, with average prices rising by 0.1% amid signs that more homes are coming on to the market, according to the Halifax (pdf).

The average price of £186,270 was up 9.7% on a year earlier, representing a slowdown on the seven-year high of 10.2% recorded in July. The lender said there were tentative signs that a better balance between demand and supply might be emerging which, if sustained, would help to dampen the pace of price growth.

Last months typical price-tag compares with the August 2013 figure of £170,224. Between then and the end of June this year, the annual rate crept up from around 5% to almost 9%.

Martin Ellis, the Halifaxs housing economist, said the prospect of an interest rate rise at some point over the coming months was likely to curb demand. Meanwhile, there was evidence that more second-hand properties were coming on to the market, as well as increased numbers of new homes, he added.

However, the Halifax house price index has been volatile in recent months; so far this year it has recorded five monthly price rises and three falls. Meanwhile, the most recent figures from both rival lender Nationwide and the Land Registry indicated a renewed surge in property prices. Nationwide said prices jumped 0.8% month on month in August  traditionally a quiet time for the property market  compared with a 0.2% rise in July, pushing the annual rate to 11%, while the Land Registry data covering July showed the average property rose in price by 1.7%, or nearly £100 a day, to £175,600.

Howard Archer, of IHS Global Insight, said the new Halifax figures tie in with our view that house prices will keep on clearly rising overall through the coming months, but at a more restrained rate.

He added: Buyer interest is likely to stay relatively healthy even if it has come off peak levels, as it should be supported by elevated consumer confidence, markedly rising employment, and still low mortgage interest rates (even if they start to rise by early 2015, they will still be very low compared to past norms). It is also currently being supported by the Help to Buy initiatives.

Mark Harris, chief executive of mortgage broker SPF Private Clients, said the combination of more property coming up for sale and the likelihood of an interest rate rise at some point in the coming months was applying the brakes to the runaway market.

August saw a further cooling in the housing market, according to the Halifax, which is perhaps not surprising as it tends to be a quieter time of year. However, the three-month data also points to a less frenzied market, which is good news for buyers, he said.