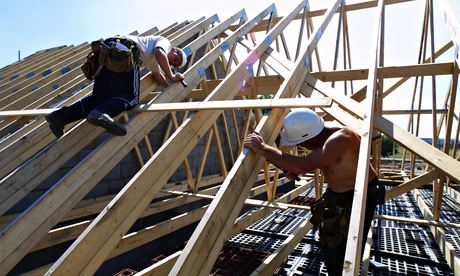 The long-term nature of the housing shortfall is being ignored. Photograph: Frank Baron for the Guardian

The UK housebuilding crisis is now top of the domestic policy agenda. Statistics show a 1m homes shortfall in supply, and initiatives such as Help to Buy have been rolled out in response, but the long-term nature of the issues have been largely ignored. And the longer this denial continues, the worse the problem will become.

In the last 20 years, annual housing completions have exceeded 200,000 only five times. And yet from 1951 onwards we managed to build more than 200,000 homes every year for 31 years. It is important we ask how, in similar periods of austerity, such housebuilding rates were achieved.

Perhaps the most significant factor is that non-profit organisations, including councils, were developing on a major scale. Aneurin Bevan, the secretary of state for health and housing between 194551, set the template for this housebuilding boom: If we are to plan, we have to plan with plannable instruments. The speculative builder, by his very nature, is not a plannable instrument.

Bevans words have a powerful resonance for our time. For too long we accepted the argument that for-profit housebuilders should be the primary mechanism for increasing supply.

And we have become reliant on private housebuilders in recent times. In the last 20 years private firms have accounted for 70%90% of all housing completions per year, yet in the 195060s their share never exceeded 60%.

Added to this is a structural change within the industry: meaning that houses are built by fewer and fewer large housebuilding firms. While this has been apparent for several decades, our research reveals how, in the aftermath of 200809 recession, their dominance increased. On their share of UK housing completions, the biggest five housebuilders increased their share from around 20% in 200809 to 33% in 201213. Our research supports the familiar argument that recessions lead to consolidation at the top of the industry, making us ever more reliant on a small number of builders able to withstand economic turbulence.

In the middle of the recession, some senior politicians and media commentators claimed the housebuilding industry was on its knees and needed special help. The evidence suggests the housing sector was hit hard. However, the five biggest housebuilders were surprisingly resilient.

From 2010 onwards their collective revenues started to increase, growing 40% by 2013. This is despite their completions increasing by only 24% over the same period. From a loss-making position in 2009, the top five housebuilders were making over £1bn in profit (before tax) by 2013. We must remind ourselves that the UK was still experiencing dips in GDP as late as 2012, so this consistent profit growth was set against a turbulent economic backdrop.

The top five housebuilders continued to make money through retrenchment. Their performance reports highlight how they prioritised margin over volume, focusing on developments with bigger returns rather than increasing their output. At a time when there were calls to get Britain building again, what was really needed was the prioritisation of volume over margin.

But, the purpose of these companies is not to mitigate the problem of housing supply, but to maximise profitability and returns.

And so Bevan was right to argue that such housebuilders are not plannable instruments. It should urge us to think differently about the means of increasing supply. Ultimately, we need a much more variegated picture in terms of supply, and the government must take a prominent role. As the major political parties now accept, the government should be supporting smaller housebuilders to address the consolidation at the top of the market. But it can and should go further.

It should give local authorities more scope to borrow to start building again, and promote partnerships between medium and large housing associations to operate as key developers.

Governments should also support development by other non-profit organisations. This means drastically increasing resources for the community-led development sector, custom-build and self-build movements.

We need to take a lesson in history here if we are to break the cycle of consistent undersupply in housing. If we continue to deny the nature of the problem, and fail to support a more diverse range of housebuilders, we are (to paraphrase Bevan) walking backwards with our face to the future.

Professor Ian Cole is a principal research fellow and Tom Archer is a PhD student at the Centre for Regional, Economic and Social Research