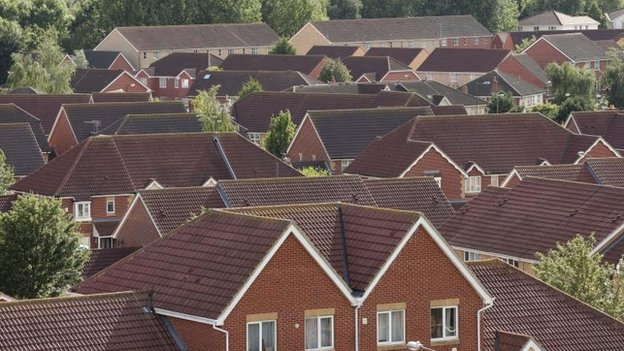 House prices have risen in every area of the UK over the past year, the ONS says

The Office for National Statistics (ONS) said UK property prices were up 11.7% in the year to the end of July.

The figures were published as the ONS also revealed that inflation, as measured by the Consumer Prices Index, had slowed slightly to 1.5% in August from 1.6% the month before.

The ONS said that house prices in July rose by at least three times more than the inflation rate in August in every area of the UK.

The annual rise in prices accelerated from June, when prices were up by 10.2%.

The slowest growth in property prices was in Northern Ireland, up 4.5%, and Yorkshire and the Humber, up 5%.

The data from the ONS lags behind some other house price surveys. Figures from the Halifax, based on its own lending data, suggested a slight slowdown in August, but the opposite was reported by its rival, the Nationwide.

The Royal Institution of Chartered Surveyors recently suggested that the housing market reached a plateau in August, with prices softening in London as flats and houses had become more unaffordable.

Housing charity Shelter said that such figures meant that parents helping their children to get onto the property ladder gave them an average of £23,000 towards the deposit.

One in four of them had to cut back on their own day-to-day spending as a result, the charity said.

"This shocking rise in house prices leaves even more people priced out of a stable home. The dream of their own home is slipping so far out of reach for young people and families across the country," said Campbell Robb, chief executive of Shelter.