Scottish estate agents buoyant about house prices after no vote 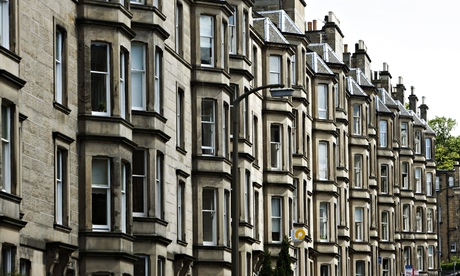 Scottish estate agents buoyant about house prices after no vote

Buyers and seller who held back until the independence referendum, but some agents warn of long-term uncertainty

Estate agents expect a flurry of house buying and selling in Scotland following the no vote. Photograph: Murdo Macleod for the Guardian

The Scottish housing market is expected to show a flurry of activity in the coming days and weeks as buyers and sellers who had been putting off making a decision react to the referendum result, industry figures said.

A report from the ONS earlier this week showed that average house prices in Scotland have now passed their pre-financial crisis peak of June 2008, and, along with average prices in England are at record levels. But a number of estate agents in Scotland said they had seen housing activity virtually stall in the last fortnight as homeowners became nervous about the impact of a yes vote.

We had a brilliant start to the year and the busiest July since the recession, said Blair Stewart, partner in charge of Edinburgh property at estate agents Strutt & Parker. In August activity dropped off as expected but in early September the market just dropped off a cliff. That was just after a YouGov poll showed that the yes campaign was winning, which set off a wave of panic.

He said that while buyers continued to look for properties, sellers were reluctant to transact. Other homeowners decided to sell but with a clause in the contract stating that completion would be subject to a no vote. He said there was already evidence that business was returning to normal following the result.

Just this morning we have already seen a turnaround in activity, said Stewart. There were two £1m property deals that we lost last week as the international buyers didnt want to commit in the uncertain political climate. Both those buyers are back on board today and we have also had calls this morning about flats that last week had had no viewings.

Ran Morgan, head of Knight Frank in Scotland agreed. We expect we will be very busy in the coming months as vendors and buyers, many of whom have put off making a decision to buy or sell a property in Scotland due to the referendum, return to the market, he said. This will lead to an increase in the number of transactions at all levels of the market. Our forecast is that prime values will rise by 3% by the end of this year and by a further 3% to 6% in 2015.

Some analysts took a more subdued view. Buying agent Henry Pryor said that while Scotland and Scottish property had woken from a nightmare that it would continue to be hungover for some time to come.

The Scots now face a period of negotiation  just how much more powers will be devolved? Will that allow Mr Salmond to raise stamp duty to the 7% that was talked about in the referendum campaign for instance? he said. There will be more headaches to come but the result this morning is fundamentally good for anyone looking to transact. Certainty has returned and gradually so will confidence.

However, many of the richest property owners in Scotland may now look to buy elsewhere because of the continued uncertainty over what the devolved powers would mean for property taxation, one lawyer claimed.

Any relief felt as a result of todays news may sadly be temporary, said Chris Groves, a partner at commercial law firm Withers. While we should be glad that the immense potential upheaval of Scottish independence has been averted, individuals with assets in Scotland would be well advised to keep a close watch on changes to property and tax rules. We expect that the Scottish authorities will seek to introduce a mansion tax of some sort and also secure more direct powers over properties.