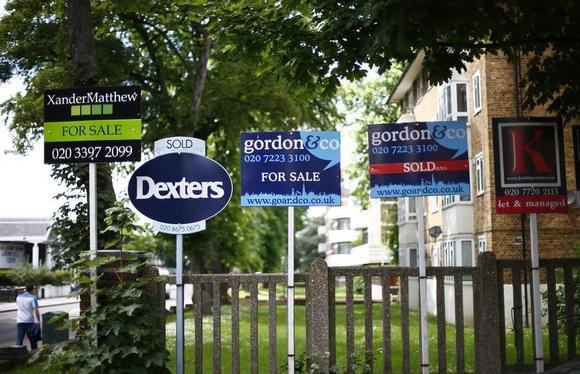 (Reuters) - House prices in Britain fell for the first time since April 2013 this month, mortgage lender Nationwide said, adding to evidence that a surge in house prices is starting to level off.

Nationwide said the average house price in Britain unexpectedly fell by 0.2 percent in September to 188,374 pounds after rising by 0.8 percent in August.

House prices are now 9.4 percent higher than a year earlier, the smallest annual increase since February and down from August's 11.0 percent growth rate, a sharper slowdown than the drop to 10.4 percent forecast by economists polled by Reuters.

Britain's housing market has been cooling since the middle of the year, when regulators required lenders to make tighter affordability checks on borrowers and capped how much could be lent to most borrowers.

The Bank of England said on Monday that mortgage approvals had fallen to a three-month low, and later this week it is due to say whether it needs to take further steps to curb mortgage borrowing.

It forecast a further slowdown in the final three months of 2014, though its chief economist Robert Gardner said the outlook remained uncertain.

"There have been tentative signs from surveyors and estate agents that buyer demand may be starting to moderate, but the low level of interest rates and strong labour market suggest that underlying demand is likely to remain robust."

Nationwide's data show strong regional variations in house price trends. House prices in London are now at a record high of 401,072 pounds, 31 percent above their 2007 peak, while in the rest of the country they are less than 1 percent above that peak. Consumer prices have risen by more than 20 percent over the same period.

While London saw annual house price rises of 21.0 percent in the third quarter of 2014 -- down from 25.8 percent in the second quarter -- northern England saw an annual increase of just 4.3 percent.