Average house now costs £480,000 as prices in historic market town near London soar by 24% in the past year 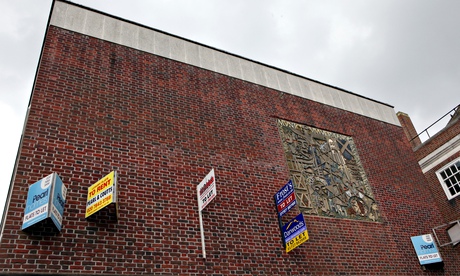 St Albans estate agents have seen house prices rise by 24% in the last year. Photograph: Graham Turner for the Guardian

The affluent commuter town of St Albans is the location boasting Britains strongest house price growth over the past year, according to the Nationwide. The typical cost of a home in the historic Hertfordshire market town is now £479,000 after prices soared by 24% in 12 months, the UKs largest building society said.

That puts St Albans at the top of the table of best performing regional towns and cities, ahead of London, where prices are up by 21% or 22% on a year ago, depending on which Nationwide measure is used.

However, several individual London boroughs have seen annual price growth way in excess of those figures. Camden saw the strongest growth, with a remarkable 42% year-on-year increase in average prices, the society said. A typical home there now costs £884,103  a price-tag eclipsed only by Westminster, where the average figure is now £984,075 (two traditionally expensive boroughs, Kensington and Chelsea, and the City of London, are excluded from Nationwides index due to low sample size).

The cheapest borough in London is Barking and Dagenham, where the average property costs £239,348.

Further afield, Belfast and Cambridge also featured in the table after each notching up annual price growth of 21%. In fifth place was Reading with an 18% increase.

Nationwide said Newcastle was the worst performing city, with average prices up 4% over the year to £182,506. Coventry and Leicester were close behind, with the annual increases put at 5% and 6% respectively. In Greater Manchester, property values are, typically, 11% higher than a year ago, though the figure for the city of Manchester was lower, at 7%.

Some areas saw smaller increases. Property values are up by just 3% in Cheltenham in Gloucestershire, while in north Devon, which includes Barnstaple and Ilfracombe, prices have not risen at all over the past year.