Why not set up a miniature London in the middle of nowhere, sell each other overpriced cocktails in jam jars and put on retrospectives of obscure artists in the village hall? Soon the house prices will go through the roof and we can all move back 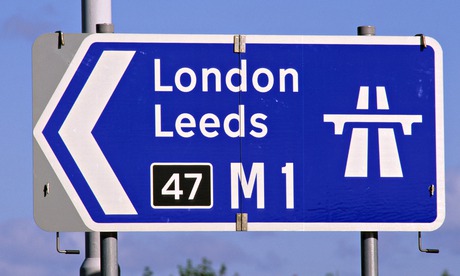 Its time to join the great exodus of post-Londoners. Photograph: Alamy

With a pregnant wife and a job that doesnt pay me in truckloads of gold bullion, I currently find myself faced with a stark property choice: I can either move out of London to raise my family or keep my baby in a filing cabinet. Im joking, of course. This is London. I could never afford somewhere with enough room for a filing cabinet.

So leaving London it is. And, for once, this is no idle threat. Traditionally, when Londoners want to punish themselves  which is often, in my experience  theyll go and visit a property website.

For what Im paying here, I could move to Dorset and get a place with stairs, theyll daydream.

Or Birmingham, and get a place with a garden. Or Wales, and get approximately three quarters of Wales. But then theyll remember that London is where their job is, and so theyll glumly return to their damp U-shaped mattress thats been wedged into an airing cupboard in a condemned bedsit full of heroin addicts in zone 14.

But lately, a line has been crossed. A distinct note of resignation has crept into conversations.

Instead of asking each other if theyd ever leave London, my friends now ask exactly when they plan to leave. This could be for a number of reasons. Perhaps its because they miss clean air.

Perhaps its because they dont want to splatter their brains across the underside of an errant HGVs mudguard the instant they get on a bike. Chances are, though, its because London has simply become too expensive to live in. Figures seem to back this up  a recent YouGov survey found that 41% of all adults employed in the capital have recently considered upping sticks and getting out due to the sheer impossible cost of the place.

Even before the pregnancy, I was one of them. London might be where all the stuff is, but its also an extraordinary ballache to live in. The only portion of the population surveyed whose lives werent made difficult by rising rent and property prices were those earning over £70,000. Thats a doctors salary. Or two teachers salaries. Or four and a bit street cleaners salaries. If I wanted to earn £70,000, Id need to supplement my own wages by ripping my baby from my wifes uterus, wiring it up to an elaborate system of pulleys and sending it out on the road as The Incredible Tap-dancing Newborn. Ive got the business plan written up and everything, although Im not entirely sure that my wife is fully sold on the idea.

So this means I have to join the great exodus of post-Londoners. I cant say Im particularly looking forward to this, because Ive met post-Londoners before, and they are all uniformly dreadful.

Nobody loves a post-Londoner, except perhaps the stallholders at the local farmers market; and even then thats not so much love as gleeful incredulity that people are actually dumb enough to pay six quid for a loaf of bread.

These post-Londoners move in, with their babies and their ironic foreign movie poster wall art, and refuse to shut up about how great everything is. The airs so clean here! theyll shout, oblivious to the eight-lane motorway splayed three minutes behind their garden. We have a village pub! theyll screech, referring to the grotty Wetherspoon tacked on to the back of a Burger King four miles away. Theres such a sense of community! theyll yell at their neighbours, who have already permanently taken against them for tramping around in wellies and waxed jackets even though they only live in bloody Sevenoaks.

But then, inevitably, things sour. After a month or two, the post-Londoner will start to complain that their internet is too slow, or that they dont live within the delivery radius of any good takeaways.

Theyll begin to whine about the lack of Curzon cinemas and the aggressively loud dawn chorus that wakes them up at four oclock every morning. Before they know it, theyve become the sort of uptight nimrod who writes passive-aggressive tweets to their rail operator whenever they fail to get a seat in the mornings, and then prefixes them with a full stop so everyone can witness their tantrum. Its an ugly sight to behold, and Im slightly worried that its also going to be my fate.

However, this is no longer my decision. If I want to live somewhere with enough room to raise a child, I simply cannot stay in London. There are things Ill miss about it, obviously. My friends, for instance. And, despite its litany of flaws, some parts of it are very pretty. Ill miss the vibrancy of the place, and the impossibly natty dress sense of local newsreader Asad Ahmad. Fresh air and space can make up for a lot, but they cant make up for that.

So heres what I suggest  dissatisfied Londoners, come with me. We can set up our own little miniature London in the middle of nowhere, and gentrify the crap out of it. We can all refuse to wear socks and sell each other overpriced cocktails in jam jars. We can put on grand retrospectives of obscure artists in the village hall, and upcycle the bejesus out of everything. Everyone will want to live here. House prices will go through the roof. And then, maybe, if all goes well, I can sell up and move back to a beautiful, freshly-deserted London. See? Everyones happy.