Estonia has seen the strongest house price rises across the EU.

UK house prices have rallied strongly over the past year, but how has our housing market performed against the rest of Europe?

The UK had the third highest annual increase in house prices amongst member states, behind Estonia and Ireland, according to data published by the statistical office of the European Union, Eurostat.

Estonia recorded price rises of 14.5pc between April and June compared to the same period last year. That figure was 12.5pc in Ireland and 10.2pc in the UK.

France and Spain, where hundreds of thousands of British expats and holiday makers have invested in property, performed poorly. Spain recorded price rises of just 0.8pc, while in France property prices fell 1.1pc over the period.

However, Spain at least appears to be levelling out. The rise in Spanish prices was the first annual increase since 2008.

Much of the UK's growth can be attributed to the London property market, where a shortage of homes and strong foreign investment drove prices up. However all regions of the UK have experienced price rises of some degree in the last 12 months, buoyed by cheap mortgage rates and Government schemes such as Help to Buy.

Halifax and Nationwide's house price indices show UK price growth has started to reverse slightly in recent months. The Centre for Economics and Business Research has warned prices will dip across the UK next year, however the long-term outlook remains strong.

New research today from Rightmove and Oxford Economics claims UK house prices will soar by 30pc by 2019, with Southampton, Luton, Brighton, Swindon and Enfield outperforming the rest of the UK.

It expects values in the South East will rise by 37pc, while the North West will see 24pc growth.

How cheap is property in France?

French property remains overvalued on certain key measures. A study in May by the OECD, which looked at long-term averages, suggested prices were 29pc too high against rents and 28pc too much compared to wages. (A map of country valuations.

A similar study by The Economist last month also found prices were nearly 30pc too high. French mortgages, however, have become far cheaper for British buyers in recent months.

France's property boom matched Britain's but the post-2008 bust was far more moderate across the Channel. 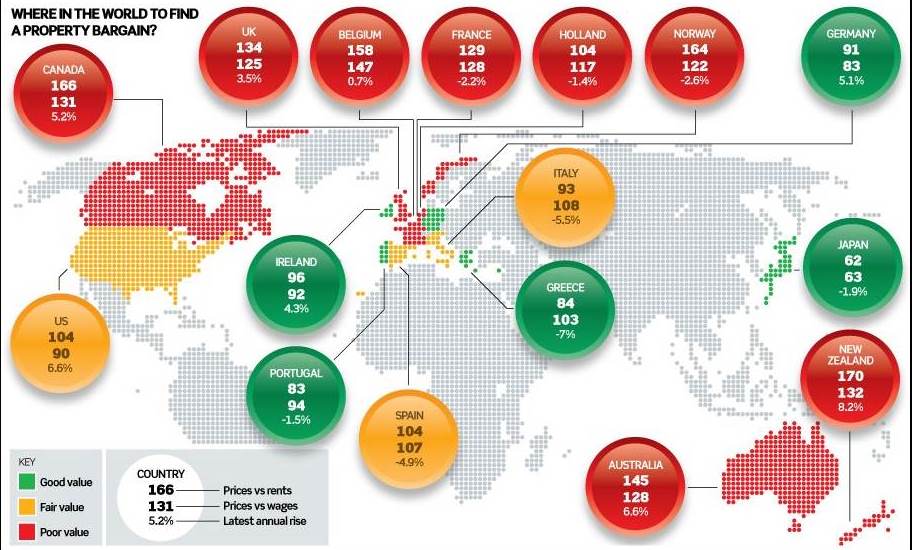 Eurostat said no data was available for Germany, Greece, Austria or Poland.

Eight countries suffered house price falls over the 12 months including Italy and Cyprus. Slovenia was by far the worst affected country where prices fell by almost 10pc.

Across the EU prices rose by an average of 1.7pc, while euro zone countries saw prices remain flat over the period.

On average prices are still well below their 2007 pre-crisis peak.