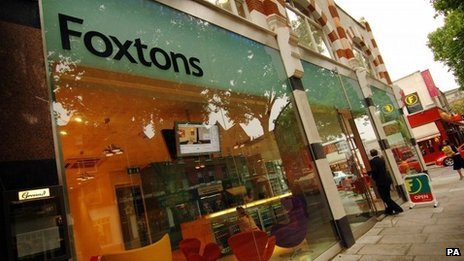 Shares in Foxtons plunged 15% after the estate agent warned that the London's property market was cooling.

The company, whose 50 branches operate mainly in the capital, reported a "sharp and recent slowing of volumes" in London sales.

London house prices have soared in the past two years, but the comments add to recent data of a market slowdown.

The company said that its property sales commissions were £16.4m in the quarter to 30 September, a fall of 7.8% on a year earlier.

That compared with the first nine months of the company's financial year, when commissions rose 16.9% to £54.1m after volumes reached their highest level since 2007.

With the shares now trading at about 174p each, they are well below their initial price of 230p when the company floated in September last year.

Several reports recently have pointed to a slowdown in house prices. Also on Thursday, the British Bankers' Association reported that the number of mortgages approved for house purchases was down 10% compared with a year ago.

Approvals had been relatively high at the start of the year, but have slowed since June, the BBA said.