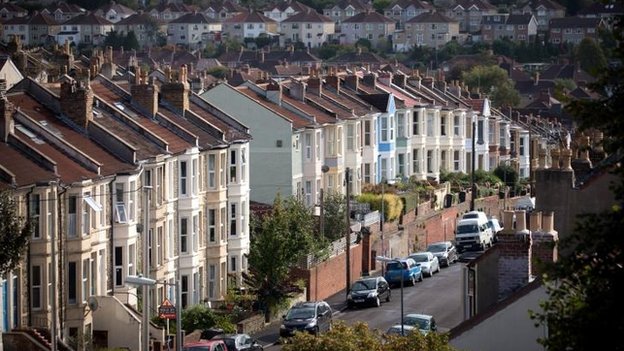 The lender, part of Lloyds Banking Group, said that annual growth in house prices slowed to 8.8% in October.

Prices were 0.4% lower in October than they were in September, it added, with the average home worth £186,135.

The lender suggested borrowers were concerned about the effect of any rate rise on monthly repayments.

In the three months to the end of October, prices were 0.8% higher than the previous quarter. However, the Halifax said that this was the slowest rise since December 2012. Its survey is based on its own mortgage lending.

The lender said that the economy was growing at a "healthy rate" and employment was rising. This, it said, should support housing demand over the coming months.

"While the chances of an imminent interest rate hike may have receded, a recent Halifax survey found that many borrowers are concerned about the impact a rise could have on their monthly mortgage repayments over the next 12 months," said Martin Ellis, housing economist at the Halifax.

"This concern is likely to curb buying intentions."

The Bank of England announced on Thursday that it had held UK interest rates at a record low of 0.5% for another month. They have been at this level since March 2009.

Rates were expected to rise early next year, but economists think this will be pushed back due to recent poor news.

Reset
Slowing price rises should help first-time buyers. However, many still face a battle to raise large amounts for a deposit, while paying rent and seeing little return on savings.

Estate agents have suggested that some first-time buyers have decided to delay any house purchases, believing that the market may continue to cool.

Other house price surveys have also shown that the pace of price rises has slowed or reversed. However, there are still geographical differences, with some areas of southern England showing faster price increases.

Alex Gosling, of online estate agent Housesimple.co.uk, said: "While it is too early to say if this is a pause or a plateau, the property market's fundamentals are strong and there's every chance that after the Christmas lull it will return to growth - albeit at a more sensible level than that seen this year."