London house prices set to level off in election year 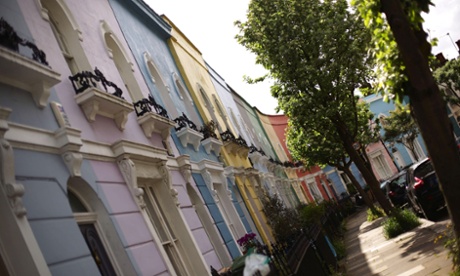 London house prices will stop their relentless climb in 2015 and level off or even fall, according to Savills. Photograph: Yui Mok/PA

Londons booming housing market is set to grind to a halt next year, bringing an abrupt end to almost a decade of the capital outperforming the rest of the UK, property company Savills has forecast.

In a vital election year, lending restrictions will start to hit demand for London homes, while at the top end of the market uncertainty over a mansion tax is likely to deter buyers and push prices down. But the property specialists say the pause will be only temporary  and that growth will restart in 2016.

While the UK market as a whole will see a 2% rise in house prices in 2015 and all regions outside London will see rises of between 1% in the north-east up to 3.5% in Scotland, the surges seen in the capital earlier this year mean that further potential for growth is currently limited, the company said. Thus London property prices will be static in 2015, but the researchers predicted the market will then pick up again so that by the end of 2019 prices will be 10.4% higher than now.

In the market for prime London homes  in the swankiest central districts like Knightsbridge and Mayfair  prices are set to drop by 0.5% in 2015 as buyers sit tight to see if a tax is introduced on properties costing more than £2m. But Savills said they are also likely to bounce back and rise by nearly 23% by the end of 2019.

Across the UK, Savills predicted an increase of 19.3% over the next five years. The south-east and east of England will drive that growth, with price rises of 26.4% and 25.2% respectively. Next year, Savills said it expected both areas to record rises of 3%.

The lending restrictions enforced by this years mortgage market review rules, which force banks and building societies to undertake rigorous affordability checks on borrowers, and a limit on mortgages worth more than four-and-a-half times salary have helped slow the rise in prices.

Savills said that by the end of this year it expected annual price inflation in London to stand at 15%, far higher than the 8.5% it was predicting at the start of the year. As a result of this growth it said the market now looks relatively fully valued, and that this had already prompted a change of sentiment among buyers.

Despite the London slowdown, however, the researchers said hutching up  where households are forced to share homes  and help from parents will become even more common over the next five years.

Although the north of England has the greatest capacity for growth over the next five years with affordability still good, Savills said the strong economic drivers needed to support it were not in place.

We expect wage rises, an improving economy and greater recycling of existing housing wealth between generations to support growth, while mortgage regulation is likely to prompt greater reliance on the bank of mum and dad with more equity released by downsizing, said Savills UK head of residential research, Lucian Cook.

With the election looming, the company also analysed the performance of the housing market under the last five prime ministers. While Margaret Thatchers premiership represented the biggest changes in terms of the structure of the market  with almost 4 million new owner-occupiers during her 11 years in office  Cook said the Blair years had more impact.

The Labour prime minister presided over a period of average house price growth at 9% a year. The legacy of this level of growth is what will dictate what happens next. It has fundamentally altered the relationship between house prices and incomes, Cook said.

As prices have risen, more households have ended up in the private rented sector, and Savills said this trend would continue.

Over the next five years the researchers expected the number of households renting in England and Wales to rise by 1.2m to more than 6m. The number of owner-occupiers is forecast to fall by 200,000.

As a result, by 2020, almost a quarter of households will rent, compared with a fifth today. Among the under-35s only one in six households will have bought a property, down from more than one in four in 2014.

Separately, mortgage lender Halifax said house prices rose by 0.8% in the three months to the end of October, the slowest quarterly rise since December 2012.

The bank said the average cost of a UK home was £186,135  five times the average earnings of a full-time male employee. This price/earnings ratio has risen from 4.69 in October 2013.