The Leadenhall Building in the City, nicknamed the Cheesegrater

British house prices have fallen 35pc in real terms since the peak in 2007 and remain stuck at levels last seen at the start of the century once London is excluded, according to hard data from the Land Registry.

We are not in a bubble or anywhere near it. Were still climbing out of a trough. The number of mortgages as a share of all homes is the lowest in almost thirty years, said Michael Saunders from Citigroup.

A study by consultants London Central Portfolio said average prices for the country as a whole were £133,538 in September, if London is stripped out. They are down from a peak in £158,494 in 2007.

This is a 16pc fall in nominal terms but the full scale of the correction has been disguised by accumulated inflation over these years, deliberately engineered by the Bank of England to avoid a debt-deflation trap. Prices in absolute terms are back to 2004 levels.

The drop in real house prices from the peak has been closer to 35pc. This is comparable to the sort of house price shock seen in large parts of the eurozone but the social and economic effects are entirely different. 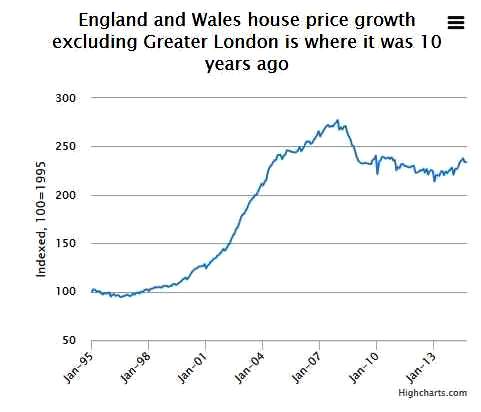 House prices in central London have decoupled from the British economy and reflect vast concentrations of wealth in the hands of rich foreigners looking for a safe-haven. There are indications that some of the money coming from Asia is leveraged tenfold and falsely designated as cash, but this is chiefly a problem for banks in Hong Kong or China rather than for British regulators. I do not think it is a policy issue for the Bank of England if foreigners want to overpay for property in London, said Mr Saunders.

Real house prices in Britain are still hovering at levels reached in 2002 during the dotcom bust and the 9/11 attacks in the US, when much of the developed world was in recession. Fears of a national house price bubble have been wildly premature, said Naomi Heaton, head of London Central Portfolio.

Mrs Heaton said the worry is that the Bank of England will be bounced into interest rate rises too early by a chorus of warnings about eye-watering prices in London, which have distorted perceptions of the broader picture.

While eight million people live in the property zone classified as London, some 56m people live elsewhere. The furore about a house price bubble over recent months has been totally unhelpful. It is simply not justified outside London, She said.

The parallel between the property cycle in Britain and the Netherlands is illuminating. Both had similar house price and credit surges before the Lehman crisis, and both have seen steep falls in real terms since then.

The difference is that Holland has not been able to take countervailing measures to stop a deep slide in nominal prices due to the constraints of EMU membership. The result is that a third of all mortgages are now underwater and household debt ratios are rising. Negative equity in Britain is just 8pc.

The picture is far worse in Spain where house prices have dropped 44pc in nominal terms, and where over half of all mortgages are in negative equity by some estimates. This creates serious economic friction for the labour market, making it harder for people to move to better jobs. The effects over time are to dampen investment and slow the shift to higher technology.

The Bank of England said loan approvals for house purchases for Britain (including London) dropped to a fourteen-month low of 61,267 last month suggesting that the market are stabilizing.

The Bank faces a difficult balancing act trying to cool excesses in London without setting back recovery in the rest of the economy. New rules for the mortgage market came into effect April allowing regulators to put pressure on lenders if debt ratios become a threat.

The Bank is now acquiring powers to impose loan-to-value curbs on mortgages, and to restrict the number of loans above 4.5 times incomes. It will also be able to force lenders to stress test whether borrowers are able to repay loans if rates jump by three percentage points.

However, the Financial Policy Committee, said household debt does not pose an immediate threat to the economy, and signalled that it would be comfortable if house prices rose by 20pc over the next three years. The ratio of household debt to incomes has dropped from around 170pc to nearer 140pc since the peak.