At this rate we'll never solve the housing crisis

This map shows the swathes of land not yet built up in Britain - as the the number of new starts drops 10pc.

The number of new homes which construction companies started to build in September across England fell 10pc on the previous month to 33,000 - despite an intensifying housing supply crisis and burgeoning population.

New starts in the private housebuilding sector were 8pc lower in the September quarter, 2014, than the previous quarter, whilst starts by housing associations were 22pc lower.

Meanwhile, the new seasonally adjusted data from the Department for Communities and Local Government showed that the quarterly rate of growth had increased by just 1pc despite political rhetoric that the UK construction industry must build 200,000 new homes a year.

Housing supply is dangerously low in the high demand areas of the south east and London, which has driven up house prices and the cost of renting.

Our country is facing a housing crisis on an unprecedented scale, because we simply arent building enough homes. For five years in a row, new home building has been at rock bottom levels," said David Orr, chief executive of the National Housing Federation.

"With the biggest baby boom since the 1950s, we are in severe danger of being unable to house our children."

Mr Orr said that housing associations are "ready and willing" to build more homes but the Government needed to free up more land and provide more funding. 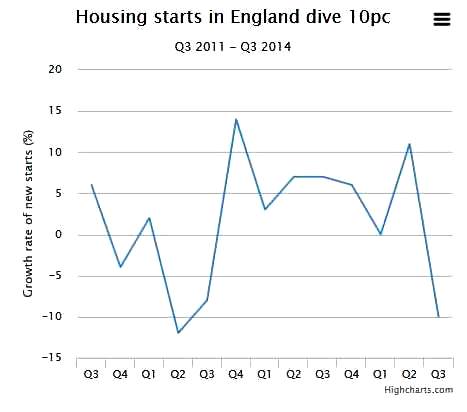 Despite a cascade of short term initiatives, there is no sign that government has a strategy to deal with this acute problem. Were calling on all political parties to commit to end the housing crisis within a generation and to get Britain building, he added.

There are a number of schemes in the pipeline looking to address the chronic housing shortage, from the planning of garden cities to a new wave of build-to-rent projects, backed by the large institutions such as M&G.

Meanwhile the Government's Help to Buy package has stimulated first-time buyer demand for new homes and boosted confidence among the housebuilders.

Adam Challis, head of residential research for JLL, said: "The country needs solutions that build resilience into the delivery programme, not kneejerk responses."

He emphasised the need for funding for small developers who were put out of business in the recession and are still not able to secure finance.

This point was echoed by Jeff Fairburn, chief executive of Persimmon - the UK's biggest housebuilder - who said that garden cities are too big a risk and many more smaller housebuilding schemes are needed across the country.