Model Makers Craft Little Flats, Skyscrapers, But Look Closely for the Queen at a Bus Stop

Thanks to a real-estate boom in London, architectural model makers are in demand these days, producing tiny replicas of high-end properties. Photo: Art Patnaude

Designers at the London firm Kandor sweat the small stuff. Vogue and GQ arranged just so on the coffee table. The creases sharp on the pillowcases. Paintings hung perfectly straight. Lampshades bathing the room in soft light.

If theyre going to spend £80 million [$129 million] on a flat, Kandor director Jim Currie says of potential buyers, theyll want to see what exactly it could look like.

The firm where Mr. Currie works is one of Londons largest architectural model makers. In Kandor Modelmakers studios, workers whittle wood with scalpels into little walls, shape plastic into gumdrop-sized pillows, and glue together the odd copse of finger-sized trees.

The work is painstaking and handcrafted. A model of a single penthouse apartment can cost £20,000. The price of a miniature of the latest London skyscraper can rise over £100,000. Kandor once sold a tennis-court-sized model of an entire city center for around £500,000. 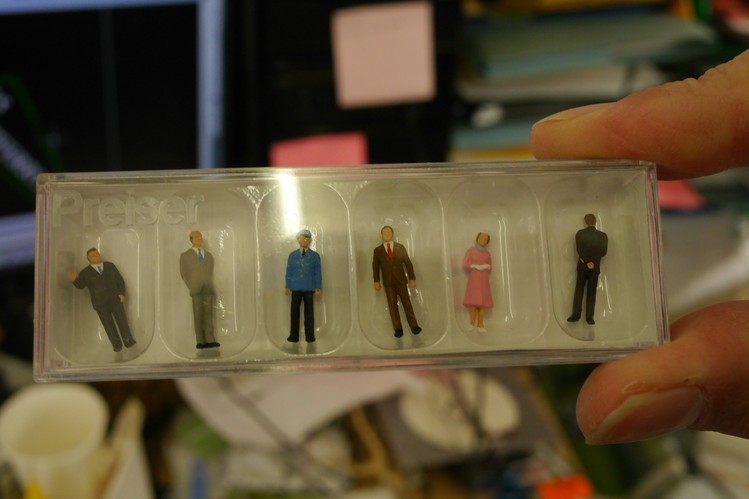 Figures like these, of the British royal family, are placed in architectural models. The models are in high demand alongside the booming life-size property market. Art Patnaude/The Wall Street Journal

Figures like these, of the British royal family, are placed in architectural models. The models are in high demand alongside the booming life-size property market.  Art Patnaude/The Wall Street Journal

Model making is no cottage industry. Architectural models have weathered the age of computer-aided design. Architects these days mostly work in software, but buyers want things they can touch and feel.

So Londons modelers are in high demand after a financial crisis lull. Cluttered workshops have been turning jobs away. Marcia Danton-Rees and her husband, Robert, said they get occasional phone calls from a major investment bank to ask how their East London firm, Capital Models, is faring as a part of a survey of small businesses. I guess were a good way for them to know how the property market is doing, Ms. Danton-Rees said. Were generally the first ones to feel a recession, and the first ones to come out.

Modeling is all about detail. Skyscrapers that scrape the ceilings of offices have LED bulbs in each apartment. Fingernail-sized bicyclesfirst stenciled on brass sheets, then dipped in acid to wear away unwanted metalare painted to reflect Londons bike-share program.

Architects have long made scale models of their projects, and specialized firms have made it into a world-wide industry, with tinkering done from New York to Hong Kong. Universities offer degrees in the trade. London, with a booming property market, is a major center for this kind of model making.

Model makers will create whatever is needed: a statue of Franklin Roosevelt sitting next to Winston Churchill in an office lobby 1/125th its real size, or a little laser-cut rowboat. The client really wanted a rowing boat, said Andy Barber, model maker at Kandor. They were so happy with it. I dont even think they looked at the rest of the model.

Wood and plastic are the basic building materials, but modern models have suitably modern innards: There is an app for turning on and off the lights. Some 3.2 miles of copper wiring will be stuffed under and into a 7-foot model of a 52-story residential block being developed in London, said Reg Fabian, director at Kandor. 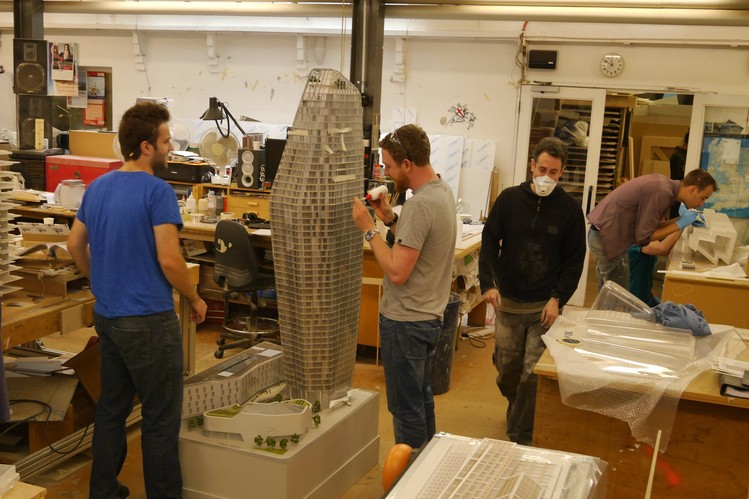 Builders create miniature versions of real estate at the Kandor Modelmakers workshop in London.  Art Patnaude/The Wall Street Journal
.
Some propose 3-D printing and software will end the age of handcrafted models. Already, 3-D printing is used on some projects, like the Frank Gehry-designed buildings in the Battersea Power Station development along the River Thames, said David Murphy, founder of Modelworks Media. Putting them together like a jigsaw puzzle means the project will take weeks, instead of months to finish, he said.

But marketing pros swear traditional models arent going anywhere. The quality is different, and people like to poke around, said Helen Fisher, program director at the Vauxhall Nine Elms regeneration project in London. She has commissioned scale models for developments because they show what were trying to deliver. You can see it straight away.

Developers will often use wood models to show planning officials and plastic ones for marketing to buyers. Wood has a more tranquil effect. One to sell a scheme, one to sell a dream, is reiterated as an industry mantra.

Wood choices branch out to walnut, oak, sycamore, and pear. Maple is very easy to cut into sharp angles, said Darius Januska, model maker at Pipers Models. As a wood, lime is kind of flaky when you sand it. It takes more fine-tuning.

Plastic has its own nuances. For instance, it can take dozens of samples to get the right reflectivity to mimic glass-walled skyscrapers, said Mark Busby, business director at Pipers.

Modeling isnt always so serious. Ms. Fisher sometimes scours models for the little jokes that modelers slip in. Stories of tiny figures engaged in lewd office behavior have been woven into industry lore, but true-life examples are more innocent: men in the ladies bathroom, a crocodile swimming in the Thames, and a Queen of England waiting for the bus.

Some real-estate developers, even when marketing London apartments in Asia, like to have their models built in London. Despite custom-built flight cases resembling a rock stars world-tour luggage, shipping is a hazard. Models are fragile; bits and pieces sometimes break off in flight. Sometimes they go missing.

We have a policy, Mr. Busby at Pipers said. We dont ship to Russia. After a particularly thorny incident with customs and a Russian state-owned client, the country was blacklisted.

Occasionally, there are just too many models. Model makers often keep some of their handiwork as examples to show clients. But when extras start to pile up, hundreds of hours of work can be laid to waste with a crowbars wallop, or pushed off the back of a truck.

Its like taking a hammer to a Fabergé, said Mr. Currie at Kandor. Part of the fun is that theyre normally treated with kid gloves, he said.

Everybody likes to get involved, said Martin Finnesey, one of Kandors founders. There is something pleasing about it.