by THE DATA TEAM

IT IS tempting for economists to couch Europes great debatesover immigration, burden-sharing, competitivenessin technocratic terms. What effect do new arrivals have on the wages of the local population? How can debts be mutualised without giving debtor countries an incentive to spend wildly? But cold logic fails to capture the emotional side to issues that directly touch on sovereignty and national identity. A new Tinbergen Institute paper is a reminder of how cultural differences can run counter to the logic of European integration.

The authors were intrigued by the difference in the behaviour of house prices between the Netherlands and Germany. Between 1985 and 2013 German house prices were tepid in comparison with those next door: Dutch house prices virtually tripled in real terms between 1985 and 2008, before declining sharply. These variations have several causes: German housing supply is more responsive than Dutch supply; the German rental market is far more developed; mortgage-interest payments are tax-deductible on the orange side of the countries shared 500km border, and not in Germany. 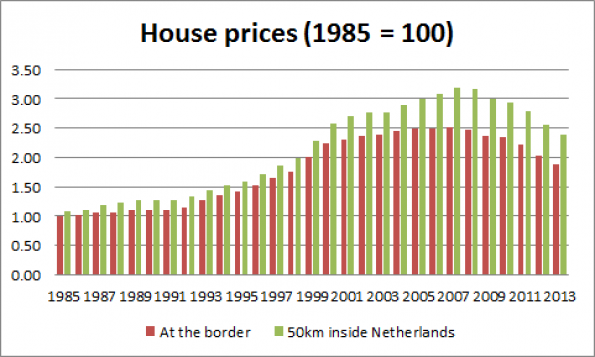 For the rational-minded, gaps this wide raise questions. If it is far cheaper to buy a house in Germany, shouldnt the Dutch take advantage and purchase property there? That would narrow the price gap between the two countries. And shouldnt the case for this sort of arbitrage be particularly compelling closer to the border, where the trade-off between an extra few minutes on the daily commute and paying a lot less for a house makes most sense? After all, the two countries are both part of the Schengen area, which makes it easy to zip between them; and Dutch citizens who live in Germany but work at home can still opt to pay Dutch income tax, mortgage-interest deductibility and all.

Sure enough, the authors do find that prices behave differently close to the border (see chart). There was a smaller run-up in prices for Dutch houses close to the frontier with Germany than for those further away from it; and the gap between the two sets of prices widened after 2000. That suggests there was greater downward pressure on Dutch prices at the border, during a time when net migration from the Netherlands to Germany jumped. It looks like a victory for the theory of efficient markets.

Not so fast. The fact remains that there is still a very sharp jump at the border, which the researchers cannot explain away through different standards of accommodation. On average houses within five kilometres of the Dutch-German border are about 23,000 pricier in the Netherlands than in Germany (even though Dutch houses are slightly smaller). When the researchers controlled for differences in housing quality, they identified a drop of 16% in asking-prices at the border with Germany. The actual gap is bigger still: the evidence suggests that thrifty German buyers achieve a much bigger discount on the asking-price than the Dutch.

The researchers speculate that this premiumof as much as 26%, they estimate is what the Dutch are willing to pay to live in their own country. That may be overdoing itthere are transaction costs associated with moving, and rising prices can be a signal to buy for those people who see their house as an investment. But it surely contains an element of truth: people attach a value to being among their own kind. That value informs not just Dutch house prices but much bigger debates, too.