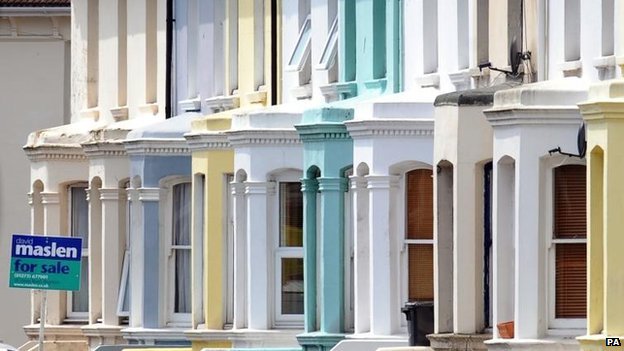 Nationwide said house price inflation fell to 8.5% in November on an annual basis, down from 9.0% in October.

That is the lowest annual rise since December 2013.

In contrast, the Land Registry said that house price inflation in England and Wales continued to increase in the year to October.

The Land Registry figures suggest that annual house prices rose by 7.7% in England and Wales, up from 7.2% in September. Prices showed a monthly rise of 0.1%.

On a monthly basis, the Nationwide said prices rose by 0.3% in November from the month before, compared with an increase of 0.5% in October.

"The annual pace of house price growth continued to soften in November, falling from 9.0% in October to 8.5%, marking the third consecutive month where annual growth has moderated," said Robert Gardner, Nationwide's chief economist.

The apparent difference between the figures from the Nationwide and Land Registry may be explained by the fact that the Land Registry includes cash sales, which can account for a third of all sales - and probably more in expensive areas such as London.

The Land Registry figures also exclude Scotland and Northern Ireland, where prices have risen more slowly than the national average.

Prices in London are still rising faster than anywhere else, with an 18.6% rise in the year to October, according to the Land Registry.

Wales reported the smallest increase, of 2%, followed by the north-east of England, where prices rose by 2.7% over the year.

Predictions for house price growth in 2015 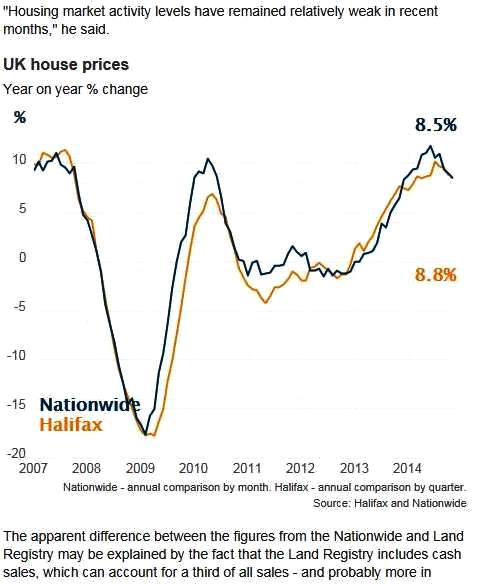 Nationwide said there seemed to be "something of a disconnect" between house price growth and economic indicators in the rest of the UK economy.

"In particular, the labour market has continued to improve, with employment rising strongly and the unemployment rate falling sharply in recent months," Mr Gardner said.

House price inflation is expected to continue to soften in the short term, but should pick back up in the longer term if the economy remains in good shape and mortgage rates do not rise sharply, he added.