Winners and losers in the chancellors pre-election giveaway 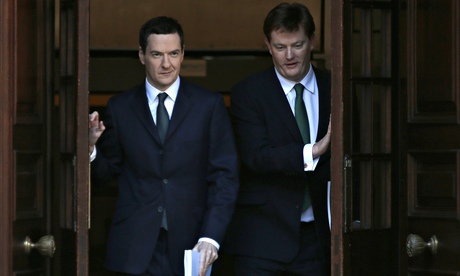 I dont often feel despairing or angry enough to write to the Guardian. Now I feel both (Lean, mean and extreme, 4 December). Not just at Osborne and his desperate, inept pre-election giveaways but at the whole course of the debate. The question being asked of party leaders is what they would cut after the next election. No commentator suggests that they might consider raising more in taxes. In this country of disgusting personal riches, rampant corporate tax evasion contrasted with government-fuelled poverty, it cant be difficult to raise money. It could even be a vote-winner if properly explained to the electorate. We are many, they are few.

 George Osborne promises to curb public spending but in fact he will inflict swingeing cuts on local government, reducing most spending in councils to a mere fraction of their 2010 levels. Councils provide social care to older people and children, and must provide these services as a priority, leaving all other services to take the brunt. Most of our income comes from government grant. Councils are the budget of last resort too. So, as this government transfers the responsibilities of social security  now renamed welfare  to local authorities; we have to pick up the tab  by law. Those with the least, those needing essential services, are staring at the precipice. Its not only the squeezed middle but the crushed bottom we need to worry about.
Alan Hall
Leader of Labours non-executive councillors, Lewisham council

 So George Osborne is promising to eliminate the governments deficit in the next parliament. Does he realise that, given the stubbornly large hole in the balance of payments, this will be impossible? A balance of payments deficit logically requires that one or more parts of the economy must be running up debts or digging into balances. If it is not the government, then it will have to be the private sector. Is this possible or desirable? There must be a limit to the extra borrowing that consumers can take on. Equally, the corporate sector will be loth to run up losses and is unlikely to indulge in a sustained borrowing spree to finance investment. Unless the balance of payments shows a miraculous improvement over the next few years, putting the public finances right can only be achieved by imposing such a massive dose of austerity that the private sector takes on the losses. But we would call that ruining the economy.
John Critchlow
Bedale, North Yorkshire

 The focus to drive the country into a surplus of £23bn by 2019-20 misses the point that a budget surplus per se is not desirable. A budget deficit per se is not deplorable. Deficits and surpluses have to be judged not for their own sake but for what they imply for output and employment. The public sector borrowing requirement was sharply brought down in the 1980s and the public finances were in surplus by 87/88. The borrowing requirement was nil in 90/91, but there was a massiverecession soon thereafter. Output started to decline in 1990.
SP Chakravarty
Bangor

 I do not see much cheer for first-time homebuyers trying to get on to the property ladder or anything to motivate or encourage developers to build more houses. I do, however, see a tax giveaway to landlords as buy-to-rent will now be cheaper because of the changes to stamp duty.
Duncan Anderson
Immingham, Lincolnshire

 George Osborne may claim to have paid off £70bn of the deficit. However, at the same time, largely as a result of his governmentss policies, the total student debt is now approaching £70bn. According to the governments own statistics, student debt is growing by more than £9bn a year, while less than £1.5bn is being paid off. The taxpayer will eventually have to foot this bill, and it is likely to be far more than the deficit which led to unprecedented austerity. The baby-boom generation is simply transferring its debts to a younger generation. Only a realistic wealth tax can defuse this financial timebomb.
Dr Mark Ellis
Huddersfield, West Yorkshire

 Having just had my sight saved by the NHS, I can see clearly enough to detect the bias in your picture caption (page 10, 4 December): As the NHS is a constant drain on public finances, welfare budget faces big cuts. To say constant drain is pejorative and negative  the NHS is a world-leading service which is no more a drain than spending on any other public services. The public spending cuts are political choices, they are not caused by the NHS as implied.
Michael Fage
London

 Mr Osborne has made it clear that tackling the budget deficit would be the over-riding and defining objective of this government. With oil prices tumbling and inflation low, surely youd raise fuel duty to help plug some of the revenue gap? With scientists saying this year will be the hottest on record (Report, 4 December), theres also a strong environmental case for measures to curb fossil fuel demand. With this and several other measures in his autumn statement, the chancellor showed theres one thing more important than the deficit: Conservative re-election.
Russell Wallis
Banbury, Oxfordshire

 The autumn statement will have done nothing to change public opinion regarding the governments commitment to reducing tax avoidance (Osborne on the offensive over tax and deficit, 3 December). Nothing was said that contained even the simplest of deterrents, like hugely increasing business rates for tax avoiding companies, or removing honours from their CEOs. Instead, giving more freedom to Northern Ireland to set its own level of corporation tax, presumably at 12.5% to match that of the republic, will cause more problems, especially when the finance ministers of Germany, France and Italy are stressing that the lack of tax harmonisation is one of the main causes allowing aggressive tax planning (Pressure on Juncker grows despite vow to fast-track EU tax legislation, 3 December).

The last time Osborne tried to create tax advantages for companies investing in Britain with the patent box scam, Germany forced him to back down. It seems he never learns. Are other countries in the EU expected to sit back and quietly watch businesses move their HQ to Belfast, thereby depriving their treasuries of much needed revenue? Only when all EU members cooperate fully, agree tactics and avoid advice from the big four accountancy firms will tax avoidance by the multinationals be reduced.
Bernie Evans
Liverpool

 The fundamental dishonesty about the deficit (The economic dishonesty is the deadliest deficit of all, 2 December) is that governments that cannot raise enough tax revenue have to borrow from the banks. As the Bank of England confessed in its recent bulletin Money Creation in the Modern Economy, banks dont lend existing money: they create new money. Why dont governments just do it for themselves, as the Green party is proposing with its quantitative easing policies?
DBC Reed
Thorplands, Northamptonshire

 So George Osborne wants to cut spending levels to those of the 1930s. He read history at Oxford but presumably his studies did not cover this period. It was a time of endemic poverty, low wages, no NHS (a hint of the future, perhaps), rickets, huge differentials in wealth, levers of power in the hands of a few, low job and life prospects for women, and fragmented education. You could say he was halfway there.
Tony Roberts
Penwortham, Lancashire

 Why is George Osborne allowed to get away with his misleading information? Before the financial collapse brought about by the banks and other large-scale financial players the UK deficit was 5% of GDP (all figures from the OECD) and the gross national debt was £0.53tn. In 2013, after the destruction of many poorer peoples lives, the deficit was still at 6.9% of GDP (38% higher) and the gross national debt was £1.19tn (124% higher). Austerity isnt working and in fact academic studies have shown it has not worked in the last 100 years. Osborne always compares his performance with the peak of 10.9% of GDP brought about in 2009 by the rescue of his banker friends. This had no connection with benefits, housing and other useful activities.

Let us stop pretending our problems are economic. They are political with the ultra-right of the Conservative party pushing through the abolition of our welfare state and transferring that common wealth to the rich.
Michael McLoughlin
Wallington, Surrey

 My increase in untaxed income announced in the autumn statement will be £120 in 2015/16 due to the rise in the personal allowance. My council tax is frozen. But my fellow residents receiving means-tested benefits, and their incomes increases frozen at 1% a year, will carry every penny of the 10% reduction in central government funding of council tax benefit. Their capped and cut benefit incomes, in work and unemployment, will be taxed by £200 to £400 a year by most councils, to which enforcement costs of at least £125 can be added.

That wipes out the rise in personal allowance of the poorest residents announced by the chancellor. When I ask the council the moral question: Why are the poorest residents bearing the heaviest burden of austerity? I get the financial answer: Because we are short of money.
Rev Paul Nicolson
Taxpayers Against Poverty

 Instead of the eye-wateringly cruel cuts in public services inherent in the chancellors obsession with rapid deficit reduction, the pre-election debate should radically change direction to one that has at its heart a Plan QE. This time, instead of giving £375bn to the banks to waste, e-print £70bn for every year of the next parliament to build the homes we need and make every building in the UK energy efficient. If all the jobs involved were paid an adequate wage then the tax take across the country would soar and help return the economy to a balanced recovery. Just like the first round of QE, the e-money would not have to be repaid so wouldnt affect the deficit.
Colin Hines
Convenor, Green New Deal Group

 George Osborne missed a golden opportunity to slash fuel bills with his stamp duty reforms. For years campaigners have been calling for a stamp duty rebate for house-buyers who undertake energy efficiency measures in their new homes. People are more likely to install insulation shortly before they move in  along with other building and decorating work  and a rebate would encourage many more to do so.

This measure would not only help hard-pressed families with fuel bills, it would also create jobs and cut carbon emissions from Britains heat-leaking housing stock.
Sophie Neuburg
Energy campaigner, Friends of the Earth

 Your editorial (3 December), which suggests that local authorities should have the power to raise funds locally to address local priorities, makes sense, particularly in addressing a deficit in local democracy. However, with what one hopes will be the chancellors final autumn statement with us, we cant just swerve around his austerity-obsessed vision of Britains future. A government that was constructed after the indecisive 2010 election has spent the last five years determinedly making the least well-off in society pay for the mistakes of the best-off in 2008/9. Change is needed at the centre as well as the peripheries of the system.
Keith Flett
London

 In the aftermath of the autumn statement very little is being said about the adverse effect high rents are having on the economy. They are substantially increasing the amount the chancellor has to provide for housing benefits and are diverting earnings away from the purchases that should be supporting the economy. The high rents are encouraging purchases by foreigners, who take the high returns out of the country, and by buy-to-let owners, who make excessive returns. This deprives would-be house owners from acquiring property in the process. The reduction in stamp duty will only accelerate these practices and should be restricted to would-be purchasers to occupy.
AB Crews
Beckenham Kent