Growth is slow, unemployment is rising, house prices are up. Here's what not to do


Social democrats usually look to Sweden for inspiration, but after a disastrous policy experiment under similar circumstances to Australia, lets be wary 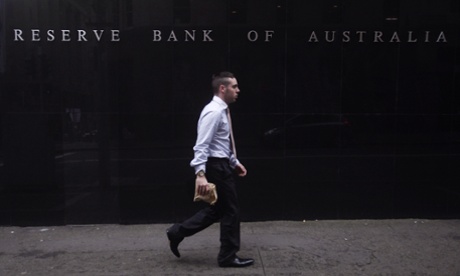 There have been plenty of voices urging the RBA to raise rates to restrain the housing boom, even with unemployment rising and inflation under control. Photograph: AAP


Australias unemployment rate is the highest its been in twelve years, and the government forecasts it will rise to 6.5% by June next year. The rate is expected to have a six in front of it until late 2017, well beyond the next election. To get unemployment under control, a whole range of different policies are needed.

For some guidance about what not to do, we should look to Sweden.

Social democrats usually look to Sweden for inspiration, not cautionary tales. But over the past few years, the Swedish have run what amounts to a trial run of a monetary policy approach that some have advocated for Australia, with disastrous results.

In 2009, Sweden was doing OK. It weathered the financial crisis reasonably well, particularly compared to its euro-zone neighbours. The Swedish economy was helped by its equivalent of the Reserve Bank, the Riksbank, which slashed interest rates from 4.5% before the crisis to 0.25% by 2009. This stopped unemployment from soaring and kept inflation near the target of 2%.

By mid-2010, the Swedes found themselves pulled in two different directions. On the one hand, the inflation and unemployment situation warranted keeping rates low for longer. On the other, some in the bank worried that keeping interest rates at such low levels would inflate a housing bubble that would eventually threaten Swedish banks if it were to burst.

The Riksbank had one policy lever  its policy interest rate  and two targets. Keeping unemployment and inflation under control might mean inflating a bubble and ultimately endangering the financial system, but raising rates to keep housing under control might crash the economy.

This bears more than a passing resemblance to the situation Australia now finds itself in. Growth is slow, unemployment is rising, and inflation is low. At the same time, house prices have been increasing from an already uncomfortably high level, lifting household debt levels and raising questions about the health of the financial system if those prices were to fall.

Faced with a situation like this, the senior Riksbank staff couldnt agree on which way to jump. The banks governor favoured rate rises to keep housing under control. He got his way, with Swedens key interest rate rising from 0.25% in mid-2010 to 2% in mid-2011, an aggressive tightening of monetary policy. One of the then-deputy governors, Lars Svensson, thought this was a very bad idea, a view shared by the likes of Nobel laureate economist Paul Krugman, who branded the Riksbank sadomonetarists.

The disagreement over the Riksbanks policy was so fierce that Svensson, who was a widely respected economics professor at Princeton University, eventually quit.

Svensson has been vindicated by events in Sweden in the past few years. The Financial Times declared the score Lars Svensson: 1, Sadomonetarists: 0. Swedish inflation has been hovering around zero for the past couple of years, well below the 2% target. It is currently experiencing deflation, and the unemployment rate remains high, around 8%. In response, the Riksbank has dramatically reversed course, slashing its interest rate all the way to zero. The banks board overruled the governor, who wanted to cut more slowly.

The lesson for Australia is clear. You cant raise interest rates to guard against bubbles without hurting the real economy, and the RBA shouldnt try.

Instead, if its worried about exuberant lending feeding an unsustainable housing boom, other policy levers should be used to stop the banks from getting carried away. The Australian Prudential Regulatory Authority (Apra) recently announced that it was prepared to use such levers to restrain the boom in borrowing for investment property. It stopped short of the sort of strict lending rules imposed elsewhere, opting instead for an arched regulatory eyebrow and a pledge to step in if lenders dont start behaving themselves, but the message was clear.

There have been plenty of voices urging the RBA to raise rates to restrain the housing boom, even with unemployment rising and inflation under control. Paul Bloxham, formerly an RBA economist and now with HSBC, recently suggested raising rates to nip the housing boom in the bud. The recent Apra announcement is a good sign that our regulators are resisting such calls to go down the sadomonetarist route.

No one wants tight lending policies for their own sake. Stricter lending rules will probably make it harder for first home buyers and low-income borrowers to get a loan. But, despite this, tighter lending rules are the best of a bad set of options facing Australian policy makers. They could raise interest rates, throwing more Australians out of work and pushing inflation below the target, or they could take no action in the face of a worrying lending boom, risking future instability. Neither of these is desirable.

Lifting Australian interest rates above where they need to be, based on the fundamentals of the economy, would be a bad idea. Apras moves to stricter supervision of housing lending will free up the RBA to do whats necessary without holding back for fear of stoking a housing boom. This is one area where we shouldnt follow the Swedish example.