10 investors own sites for 30,000 homes, data shows, with interest from Abu Dhabi and China in Hyde Park site

The control of plans for tens of thousands of new homes in London is now in the hands of foreign investors who are increasing their grip on the capitals prime property assets, figures obtained by the Guardian have revealed.

Sites for close to 30,000 homes are owned by just 10 investors in Hong Kong, China, Malaysia, Australia, Singapore and Sweden, sparking warnings from politicians and housing industry experts that too many are being built to act as safe deposit boxes for international investors rather than for Londoners in housing need.

Foreign owners seizing on the London housing market include the Usaha Tegas Group, owned by Malaysian billionaire Ananda Krishnan, which has submitted plans for 104 luxury homes on the site of the former St Johns Wood barracks, with apartments expected to sell for up to £5m each and seven-bedroom stone-clad detached mansions around landscaped gardens that will go for more.

Knight Dragon, a company owned by Hong Kong billionaire Henry Cheng Kar-shun, has consent to build 10,000 homes on the Greenwich peninsula, including three-bedroom apartments, with interiors designed by Conran & Partners, costing above £800,000.

More than a quarter of the homes in large developments of over 1,000 units in the capital are being built by foreign investors, according to data provided to the Guardian by Molior Consulting.

There is a huge concern, said Joan Ruddock, MP for Lewisham Deptford, where Hong Kong-listed conglomerate Hutchison Whampoa is behind plans for 3,500 homes. This is global capitalism and we have to find a way around it. There have to be some tougher controls about the balance between housing for the more well off and affordable housing, and I mean genuinely affordable. The capital will not be sustainable unless people in the public services can afford to live here. We are pricing them out.

Investors from China and an Abu Dhabi sovereign wealth fund are also reported to be interested in bidding for the Hyde Park barracks site which is likely to be sold by the Ministry of Defence for about £650m. It is expected to be transformed into super-prime housing.

Ikea, the Swedish furniture giant, is developing a 1,200-home scheme next to the Olympic Park in east London after outbidding a UK firm for the site.

There is a perception these major residential developments backed by international money, particularly in super-high towers, only serve a market for overseas investors who want to buy a luxury flat in a skyscraper to treat as a safety deposit box, said Nicky Gavron, the former deputy mayor of London and chair of the London assemblys planning committee. Such properties often become buy-to-leave investments and dont meet the needs of Londoners. London is in the midst of a housing crisis  what we need is mixed-income housing where people actually live.

Royal Wharf, a development of 3,400 homes by Singapore developer Oxley Holdings in east London, was launched in Beijing, Shanghai, Kuwait, Abu Dhabi, Dubai, Hong Kong, Singapore and London. In November the London mayor, Boris Johnson, led a trade delegation to Malaysia, Singapore and Indonesia during which he promoted investment in housing schemes in the capital by government and private investors.

The pivotal role of foreign governments in Londons housing market was revealed in November when Malaysias housing minister, Datuk Rahman Dahlan, was chosen to launch the latest phase of homes at the revamped Battersea Power Station and a new open space was named Malaysia Square.

City Halls position is that overseas investment is a long-standing feature of all major cities and without it fewer homes, including those classed as affordable, would be built and fewer jobs created. Johnson insists foreign investment is needed specifically to unlock complex regeneration schemes, such as Battersea.

Asked if Knight Dragon was trying to serve the overseas investment market with its 10,000-home scheme on the Greenwich peninsula, Richard Margree, its chief executive, said: We want people to live on the peninsula and enjoy the lifestyle we will be creating. A site of this scale will appeal to a wide range of buyers.

He stressed the project would provide jobs, leisure and cultural uses, offices, new schools, community and health services, plus accessible open spaces, but said it was too early to say at what level affordable rents would be set.

Tim Craine, director of Molior, a residential property research consultancy, confirmed the influx of Asian money was causing a surge in the number of homes being built but added: They are being built at the wrong price. A one-bed flat for £1m is not going to solve anyones housing crisis.

Asked about the wrong price claim, Margree said: Our prices so far have ranged from £250,000 to £1.9m, to reflect a range of homes consistent with creating a balanced community.

Richard Blakeway, Londons deputy mayor for housing, land and property, defended the scale of foreign investment. With London facing unprecedented growth, foreign direct investment, together with traditional institutional finance, is helping to unlock developments that have stalled for many years, allowing thousands more homes to be built for Londoners far sooner than would otherwise be possible, he said. 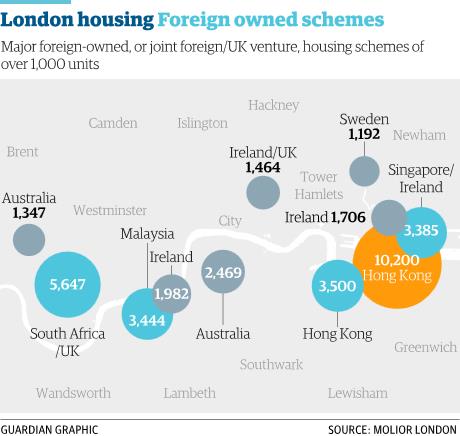 However, the mayor is determined to ensure local people are not disadvantaged by exclusive sales to overseas buyers. That is why he has challenged them to commit to making new homes available for Londoners to buy before, or alongside, people living abroad. So far more than 60 of Londons biggest developers have signed up to his concordat.

The growth of Asian investment in residential property is such that developers from mainland China, Hong Kong, Singapore and Malaysia are behind plans for more than 21,000 homes in central London, according to data provided by Molior. From 2012 to 2014 Asian investment in all kinds of central London property doubled to outstrip UK investment, accounting for more than a quarter of the £21bn that went into the area, according to Savills.

Johnson has been publicly supportive of foreign investment and last year struck a deal for ABP, a privately owned Chinese company run by Xu Weiping, to be the developer behind the £1bn transformation of the Royal Albert Dock. It will include 850 homes and is intended as a gateway for Asian and Chinese business seeking to establish headquarters in Europe.

A Chinese state-owned property company, Greenland Group, is a co-investor in Wandsworth to convert the old Ram brewery into 660 flats and is also investing around £600m in a site at Canary Wharf with consent for 700 apartments, including the tallest residential skyscraper in Europe at 242 metres. Greenlands chairman, Zhang Yuliang, has cited the stable return on assets, high-quality assets and sound market liquidity as reasons for investing in London.

Prime sites for almost 6m sq ft of office space are owned by a further 10 firms based in Kuwait, Qatar, Canada, the US, Japan, Slovakia and Germany. Since January 59% of investment in the capitalss office and shops has come from abroad with Asian investors dominating foreign purchases, according to data from Savills.

In the capitals financial districts, the Saudi Arabian sovereign wealth fund that owns the stalled 63-storey Pinnacle skyscraper project in the City with Arab Investment Limited is planning to sell the site undeveloped. Axa, the French insurance giant, has been reported as a possible buyer. The Qatar Investment Authority has been in negotiation to potentially break the British record for the amount paid for a single building, by paying £1.1bn for the Norman Foster-designed HSBC tower at Canary Wharf.

Flimsy facades behind which there is only darkness

The tidal wave of foreign investment flooding into London has brought a new kind of architecture and urban form. It is the building-scale equivalent of the Lamborghinis and Maseratis that tear through Knightsbridge in the summer, a form of Sheikh-chic extruded into teetering towers. These tycoons totems are nothing but fortified silos for parking flight capital, safety deposit boxes stacked high, and clad with reconstituted stone and glass. They will soon march along the Thames, from Battersea to Bermondsey and beyond.

They are described as things like a new waterside village for London (Royal Wharf), but the reality is that many will be Potemkin villages, flimsy facades behind which the lights may never even be switched on. Mostly sold off-plan in east Asia, these properties are not so much buy-to-let as buy-to-leave. Many will create empty swaths of zombie town, their retail units left untenanted, their private cinemas unused.

The biggest proposals tend to look like physical bar charts of Londons inflated land values, dense thickets of towers sprouting from improbable sites, overshadowing gloomy slivers of private-public space at the bottom of their steep canyons. Having paid over the odds for the plots, developers must squeeze out the value of every inch. And given the Faustian pact of the UK planning system, most local authorities will be happy to let them do so in order to cream off a fatter bounty of planning gain (when land value rises after the granting of planning permission).

Yet time and again, the deal ends in the developers favour, swayed by viability assessments  reports filled with spreadsheet spells that justify why it would not be possible to have a higher percentage of affordable housing  while all the time guaranteeing the developer at least 20% profit.

Knight Dragons plans for the Greenwich peninsula have been described as social cleansing by local people, providing just 25% affordable housing, marshalled to the back end of the site, when the boroughs policy specifies 38%. Hutchison Whampoas Convoys Wharf development  refused by Lewisham, but called in and passed by the mayor after the Hong Kong developer wrote a furious letter complaining of unreasonable and unwarranted demands  will have just 15% affordable housing.

But it is precisely these kind of investors, fuelled by the gushing pump of petrodollars and the riches of sovereign wealth funds, that can afford to meet the statutory planning policies. Local authorities, and the mayors own planning team, must have the strength to enforce their own plans, or else be trampled by the supercharged bulldozer of international capital, leaving an empty city in its wake. Oliver Wainwright