House prices in England and Wales have climbed to a new record high after overtaking the previous peak reached at the height of the property boom, according to official data.

The Land Registry said the average home saw more than 1% added to its value in June 2015 alone, and said 21 London boroughs had seen annual price growth of at least 10%.

The figures prompted housing charity Shelter to warn that the governments election pledges on home ownership were on the verge of becoming an empty promise.

The Land Registry  whose data is viewed by many as the most comprehensive and accurate  said the typical price of a home reached £181,619 in June. This is the highest figure in the 20 years that the department has been compiling data, and means house prices have now surpassed pre-crash levels. At the peak of the property boom in November 2007, the average selling price for a house in England and Wales was £180,983. 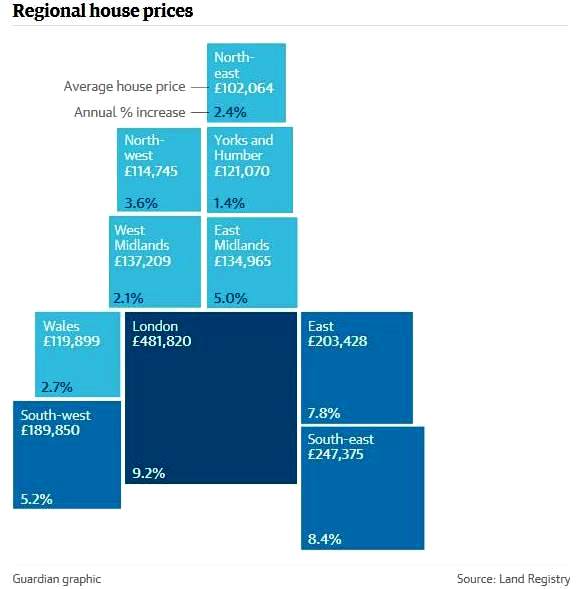 However, the headline figures mask wide regional variations. While the average home has increased in value by 5.4% over the past year, the typical London property has notched up a 9.2% rise to reach £481,820.

Even within the capital, the 33 London boroughs have experienced varying fortunes. In Newham, prices are up 16% over the year, with Hillingdon and Enfield close behind at 15.2% and 15.1% respectively. However, wealthy individuals who decided to buy in Kensington and Chelsea a year ago, purely as an investment, may be disappointed with their return so far: prices there fell slightly last month, and annual price growth is currently running at just 0.7%. 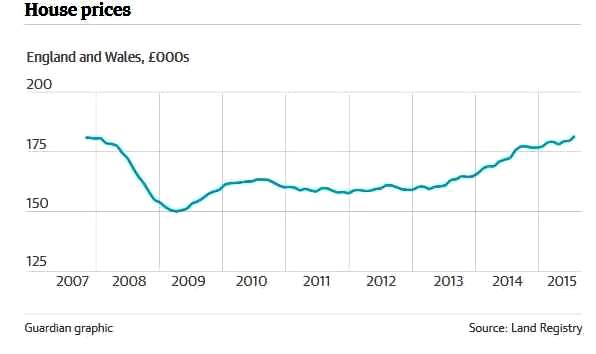 The prime property market has taken a hit, with pre-election talk of a mansion tax and other measures seemingly putting off some would-be buyers: separate Land Registry data reveals the number of properties sold in England and Wales for more than £1m has slumped by 22% in a year.

Responding to the figures, Campbell Robb, Shelters chief executive, said: When house prices soar by this much in a single year thanks to our housing shortage, its clear that for millions of people across the country, a home of your own is fast becoming a pipe dream.

He added: For people stuck in their childhood bedrooms into their 30s, or families having to put up with expensive and insecure renting, the housing market isnt working for ordinary people. The prime ministers election placard promising a home of your own is on the verge of becoming an empty promise. The only way for the government to turn this crisis around is to urgently invest in the genuinely affordable homes we need.

Guy Meacock, head of the London office of buying agency Prime Purchase, said his firm was seeing more international buyers than it did earlier in the year. Expats here on holiday visiting family, for example, who are taking the opportunity to get in front of sellers and see what is available  Selling agents have had a very difficult start to the year, but the market is building momentum and it could be a busier autumn.