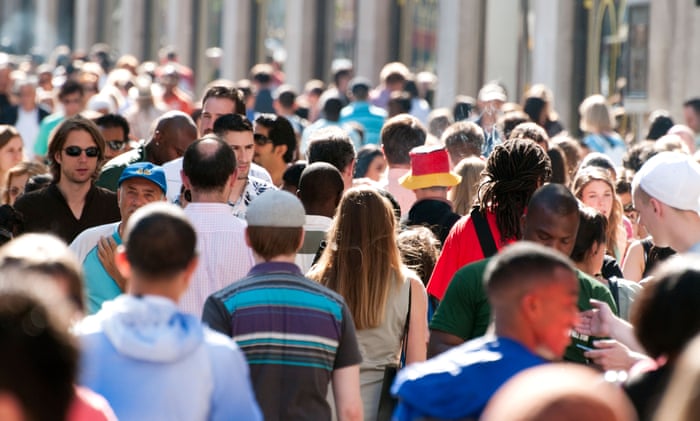 The Office for National Statistics has predicted a 4.4 million rise in the UKs population in the next decade. Photograph: Alamy

It might seem like an obvious comment, but that doesnt make it any less important. Britains growing population will push house prices higher and higher. No cyclical boom and bust, just onwards and upwards.

The observation was made by the analytical arm of the credit ratings agency Moodys and explains why, along with the limited capacity for private housebuilding, an investment in housing will remain the preferred option of every UK household.

The starting point is the forecast from the Office for National Statistics that predicted a 4.4 million rise in the UKs population in the next decade from last years 64.6 million, eventually reaching 70 million in 2027.

Moodys Investors Service is interested in the subject from the narrow view of clients that buy and sell mortgage-backed securities. These bundles of mortgages, which lost so much of their credibility in the financial crash when many were found to contain sub-prime loans, are big money spinners for the banks again, and nowhere more so than in the UK.

A healthy appetite for ever-bigger mortgages and a low level of defaults makes for a buoyant financial market. Moodys says the UK has all the right ingredients for investors to make a healthy profit  a disaster for young people.

As we can see from Moodys graphs, Britain and the Netherlands have all the right ingredients, unlike Spain and Ireland. Low unemployment provides the security investors need of a low default rate by mortgage borrowers.

A high and growing number of 25- to 35-year-olds provides the army of first-time buyers that fuels property sales.

The trend for population growth of 25 to 35-year-olds in selected EU countries. Photograph: Eurostat

And a rising general population makes for property as a secure investment.

Spain and Ireland, in particular, have seen a huge outflow of young adults seeking work and that trend is expected to continue. Even though the young people who remain are likely to encounter healthy wage rises in tighter labour markets, giving them bigger spending power, this trend is unlikely to compensate for the lack of people seeking to get on the property ladder, Moodys says.

So the young might find it easier to get a job in the UK and the Netherlands relative to other EU countries, but they will never be able to afford a home in the areas where wages are halfway decent because house prices will always accelerate at a faster pace.