Which areas will see the biggest house price rises by 2020?

Exclusive: a new study on house price movement across the UK, the smart places to buy, and if China is really a threat

House prices in the South East will increase by more than 25pc in the next five years, according to a new forecast from JLL Photo: ALAMY

Better job prospects, rising wages and a more stable economy will drive a five year wave of activity in home sales and a surge in house price growth, especially in the South East of England.

Analysts at the property group JLL have predicted that the cost of the average home in the South East will increase by 26.4pc by 2020, the fastest rate of growth of any region of the UK.

China is a dormant threat and very tough to call.
Neil Chegwidden, JLL

The most dramatic rise in our cities will occur in Bristol, Manchester, Leeds and Edinburgh which are attracting graduates and people relocating to new jobs.

"Many owner-occupiers have deferred moving house over the past seven to eight years following the global financial crisis but with the outlook more positive and stable we expect at least some to seize the opportunity to move home, releasing pent up demand, as well as more stock, onto the market," said Adam Challis, head of residential research for JLL.

The new study forecast that the average house price across the England, Scotland and Wales would rise by 22.8pc over the next five years, with a 5pc rise in 2016.

The firm is predicting a steadier market place with strong growth in the regions but without a repeat of the spike in house prices seen in 2014 - particularly in London.

"The whole housing market could potentially be more active. However, continued high moving costs despite lower stamp duty burdens for most, will provide some brake on transactions, as too will the lack of choice for buyers," Mr Challis said.

The rise in interest rates expected next year from the Bank of England poses a mild threat to the housing market recovery, he continued, but the more significant risk come from outside the UK following the recent collapse of the Chinese stock market and the overall slowdown in its economy. 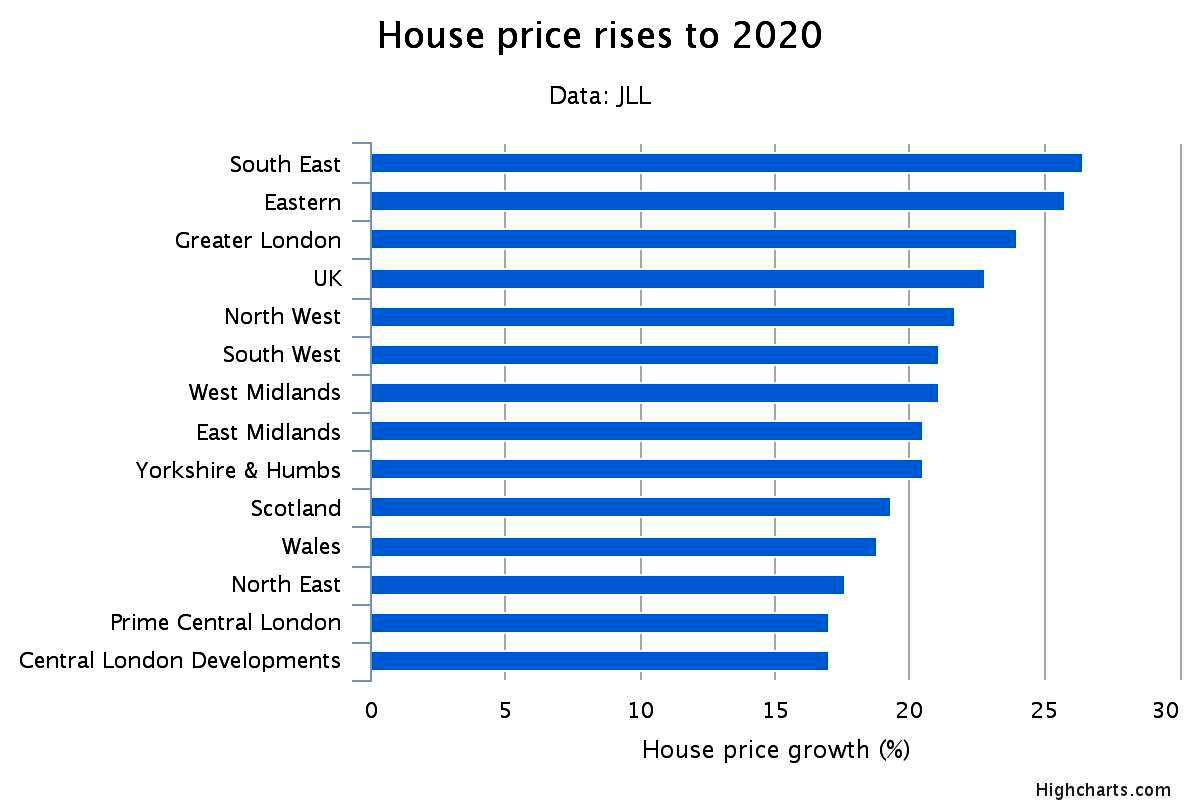 "China's importance is undeniable, it is now the world's second largest economy, and it is hard to imagine that there will not be at least some knock on impacts elsewhere," said Jon Jon Neale, head of research at JLL.

In six months time we could be wondering why we were worried. But, if there is economic trouble in China ahead it could knock confidence in the stock market and housing market, and in the long term it could impact jobs and companies in Britain that sell products to China, Mr Chegwidden explained.

Central London house price growth will be the slowest

Of all the regions in the UK, central London is expected to show the slowest rise in house prices with a 17pc rise by 2020 and just 1pc in 2016. Although the average value will still hit £3,244,317 in the next five years.

This sharp reversal was triggered by the Chancellor's hike in stamp duty on property purchases over £1.5m which was introduced last December. That, combined with uncertainty surrounding the EU referendum will distort the expensive central London market as will the potential appointment of a Labour candidate as the next Lord Mayor of London.

"We expect slightly lower activity and marginally softer pricing pressures during the second half of the 2017, with international buyers and central locations more sensitive than domestic buyers and outer London submarkets," said Mr Challis.

Where to buy now for the biggest house price growth

These places are expected to outperform the bigger region in terms of house price growth by 2020...

1 Manchester - North West. "Manchester has a real buzz and is attracting lots of young companies as well as established businesses. Graduates are choosing to stay in the city," said Mr Chegwidden.
2 Leeds, York and Harrogate - Yorkshire & Humberside. These are the affluent areas of the region where people are not as constrained by affordability. And yet, because prices are nowhere near the £1m, £2m, £3m mark that they are in London, growth has not been hit by stamp duty.
3 Edinburgh - Scotland
4 Bristol - South West
5 Woolwich - Whitechapel, Stratford, Deptford, Ealing, Acton, West Drayton, Greater London. "These are the growth areas of London, benefitting from Crossrail and from people moving out of central London in search of affordble homes close to the capital," said Mr Chegwidden.
6 Maidenhead and Slough - South East
7 Cambridge, Essex, and anywhere accessible from East London and the City - Eastern