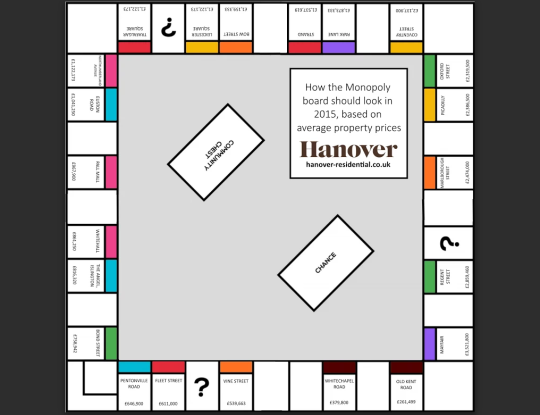 To mark the 80th anniversary of the London Monopoly board property experts have updated the classic game's board to highlight the change in London house prices, moving the street names around accordingly.

The only full set of names remaining in their original 1935 positions are the browns: Whitechapel and Old Kent Road.

The re-organised board, a concept created by estate agents Hanover West End which is not actually for sale in physical form, shows Mayfair keeping its top spot comfortably with an average house price on the street of £3,521,800.

Its former purple companion Park Lane fell back into a position on the board that was traditionally inhabited by a yellow-coloured street.

One big mover on the new-look board is Euston Road with a current average house price of £1,041,250.

It has moved up six places to where Marlborough Street was previously situated on the board.

Marlborough Street itself has made a great strides though, and is now only a couple of slots away from top of the tree Mayfair.

Richard Douglas, Director at London property experts Hanover West End said: We anticipated that there would be differences in the property market from 80 years ago, however the extent to how much it has changed is surprising.

We knew Mayfair would remain at the top of the board and Old Kent Road at the bottom, but the areas that have moved in between are eye-opening.'

He added: Fleet Street, which has always been a prominent central location in London, has dropped down to the blue area of the board with an average value of £611,000.

The way London has evolved and grown has had a significant impact on which areas have flourished. We are certain London will continue to change over the next 80 years.