If you have a house, you're laughing. If you don't you might never get one as house prices rocket ahead of earnings. This is what you can do to get on the ladder

House prices have surged at five times the pace of earnings increases typically over the last five years, according to a think-tank.

The Resolution Foundation said its analysis of Office for National Statistics (ONS) figures shows that house prices have increased by 36% since April 2011 across the UK - 5.1 times the 7% increase in average weekly earnings over the same period.

The findings were released as the ONS said UK house prices increased by 9% in the year to March, accelerating from an annual rate of 7.6% in February. 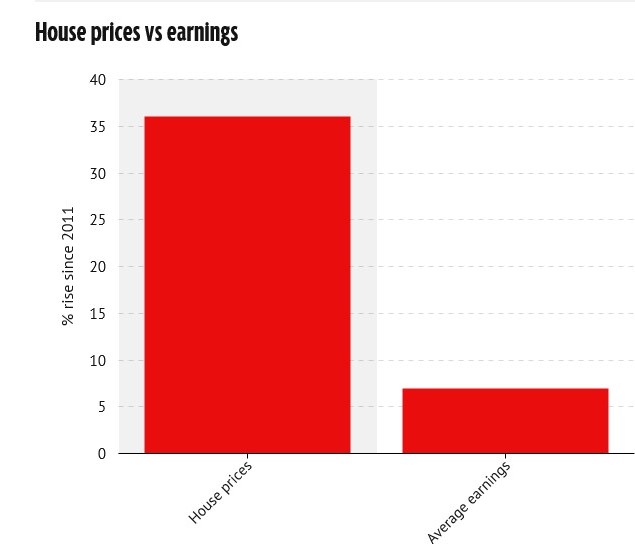 Both the house price index for England and that for Wales are at record highs, the ONS said. In London, house prices have increased by 13% annually to reach £552,000.

In Scotland, the average property value is £193,000. House prices in Scotland fell by 6.1% annually.

House prices in Scotland and Northern Ireland are both below their pre-economic downturn peaks.

Across England, the ONS said the the North East has the lowest average house price, at £158,000.

The Resolution Foundation said even in Scotland, Northern Ireland and the North East of England, where house price growth has been most modest over the last five years, it has been roughly double the pace of average earnings growth.

"It has increased the stock of mortgage debt, and fuelled demand for renting that is driving up costs there too.

"Ultimately we all pay for house price inflation by spending a greater share of our incomes on housing."

Houses are based on bigger and bigger debts

Separate figures from the Council of Mortgage Lenders (CML) showed home mover house purchase lending in March was at its highest levels since 2007.

Buy-to-let lending for house purchase in the first quarter of 2016 was the highest since the CML started tracking the data in 2006, with £7.2 billion of loans advanced.

Landlords borrowed £4.3billion for house purchase in March, up 290% on March 2015. On April 1, a three percentage point stamp duty hike came into force for people buying second homes, such as buy-to-let investors.

Paul Smee, director general of the CML, said: "Activity was distorted in March due to a rush to beat the introduction of changes to stamp duty on second properties in April, alongside the seasonal uptick in activity before Easter.

"While the increases are substantial, these supercharged levels of activity are likely to be temporary and will fall back over the summer months."