UK house prices fell 0.8% in April, according to the Halifax House Price Index. The fall followed a 2.2% surge in March, and still leaves home prices some 9.2% higher than a year ago. That's nevertheless a cooling in the annual rate of increase to the lowest since November of last year, suggesting that house price inflation may be starting to moderate 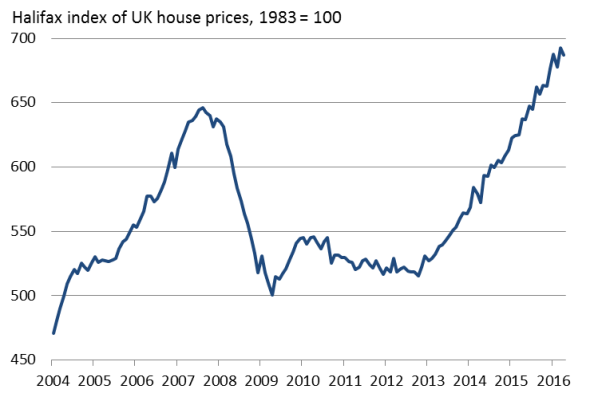 Since the government introduced its flagship 'Help to Buy' scheme in 2013, a period which has also seen the wider UK economic recovery gain momentum, the rise in property prices has been especially steep. Over the past three years, national house prices have surged 29.6% on average, with London prices up 62.5%. At the other end of the scale, the North of England has seen the weakest improvement over the past three years, with prices up a modest 3.7%. 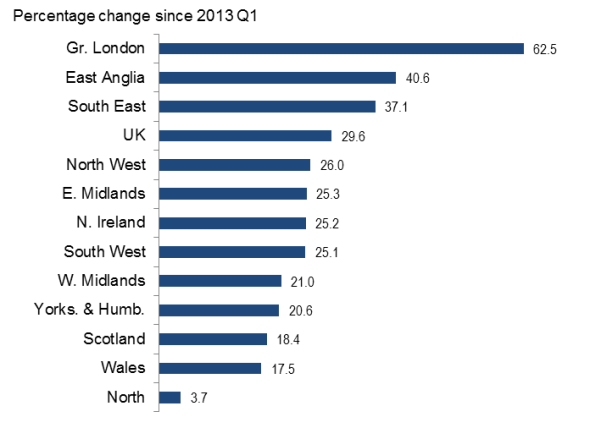 The uplift over the past three years has pushed prices up 6.0% nationally in the first quarter of 2016 compared with the pre-crisis peak, which was reached in the third quarter of 2007. However, the recovery from the crisis has by no means been universal, with wide regional variations. Greater London has led the recovery, with prices now some 39.3% above the pre-crisis peak, followed by the South East, which has seen pre-crisis prices exceeded by 21.7% on average. East Anglia and the South West have seen more moderate recoveries of 16.8% and 5.7% respectively. 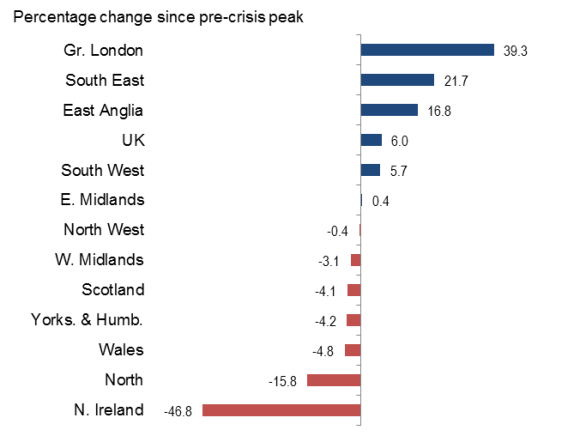 It's a different picture in Northern regions and outside of England. House prices in Northern Ireland in particular remain some 46.8% below their pre-crisis peak. Prices in Wales and Scotland remain 4.8% and 4.1% below prior peaks respectively. In England, the North has seen the worst recession recovery, with prices still 15.8% below the peak seen in the second quarter of 2007.