In early June, no one knew what "Article 50" was. Now, everyone knows: It is the piece of EU law in the Lisbon Treaty that will trigger Britain's exit from the European Union.

We do not know when prime minister Theresa May will formally trigger Article 50. It could come as soon as this year, or 10 years from now. Almost everyone assumes that once the UK's Article 50 request is made, that's it. We're out. No going back.

But ... there is a little-known loophole in Article 50 that would keep the UK in the EU even after the request is triggered. Basically, the UK can change its mind after the Article 50 request is made as long as no final agreement on Brexit has been reached.

First, this is the text of Article 50:

A Member State which decides to withdraw shall notify the European Council of its intention. In the light of the guidelines provided by the European Council, the Union shall negotiate and conclude an agreement with that State, setting out the arrangements for its withdrawal, taking account of the framework for its future relationship with the Union. That agreement shall be negotiated in accordance with Article 218(3) of the Treaty on the Functioning of the European Union. It shall be concluded on behalf of the Union by the Council, acting by a qualified majority, after obtaining the consent of the European Parliament.

Any country making an Article 50 request has two years to reach a pact with the EU. After that, you're out. So as a matter of logistics, the UK is not likely to trigger Article 50 until after it has secured an exit deal to the government's liking. That could take a long time. 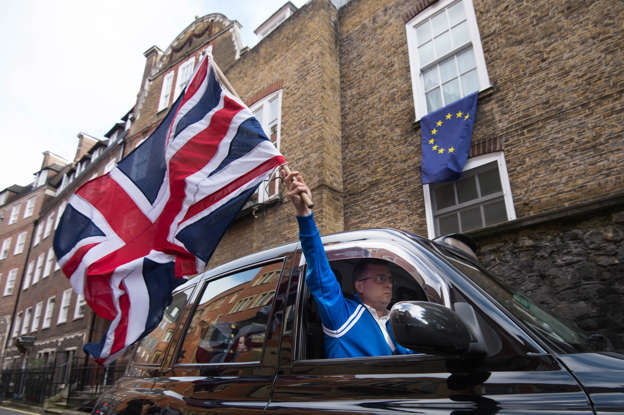 © PA But even if that happens, Article 50 still lets us back in.

Most people mistakenly think that the only way back into the EU is through an Article 49 request. Any country wishing to join the EU must go through Article 49  it is the standard process for all new countries, and it takes years. The UK would be at the back of that line. Article 50 even mentions this process, which is why so many people think it is the only way back. It says: "If a State which has withdrawn from the Union asks to rejoin, its request shall be subject to the procedure referred to in Article 49."

But the House of Lords did the UK a favour and asked for legal advice on the specific question of whether Britain can change its mind. (The advice came from Sir David Edward KCMG, QC, PC, FRSE, a former Judge of the Court of Justice of the European Union and Professor Emeritus at the School of Law, University of Edinburgh; and Professor Derrick Wyatt QC, Emeritus Professor of Law, Oxford University, and also of Brick Court Chambers.)

Here is what their advice said:

Can a Member States decision to withdraw be reversed?

We asked our witnesses whether it was possible to reverse a decision to withdraw. Both agreed that a Member State could legally reverse a decision to withdraw from the EU at any point before the date on which the withdrawal agreement took effect. Once the withdrawal agreement had taken effect, however, withdrawal was final. Sir David told us: It is absolutely clear that you cannot be forced to go through with it if you do not want to: for example, if there is a change of Government. Professor Wyatt supported this view with the following legal analysis:

There is nothing in the wording to say that you cannot. It is in accord with the general aims of the Treaties that people stay in rather than rush out of the exit door. There is also the specific provision in Article 50 to the effect that, if a State withdraws, it has to apply to rejoin de novo. That only applies once you have left. If you could not change your mind after a year of thinking about it, but before you had withdrawn, you would then have to wait another year, withdraw and then apply to join again. That just does not make sense. Analysis of the text suggests that you are entitled to change your mind.

... There is nothing in Article 50 formally to prevent a Member State from reversing its decision to withdraw in the course of the withdrawal negotiations. The political consequences of such a change of mind would, though, be substantial.

So, to sum up, even if the UK triggers Article 50 we can still cancel that decision if, for instance, there was a change of government. But the government would be up against the clock: It would have to make that U-turn before the rest of the EU voted on the Article 50 request, and before the two-year deadline elapsed.

Given how long the exit process is likely to take, and how unpredictable UK politics has suddenly become, don't rule out a change of government or a change of heart.