Plunge: Areas popular with EU nationals are most susceptible PA

The London neighbourhoods most vulnerable to a potential housing market dive sparked by the Brexit vote have been revealed in a new analysis.

It comes amid fears of a mass exodus of EU citizens from the capital  a Brexodus  following the referendum. More than 840,000 people born in the other 27 member states live in London, and many have spoken of their concerns for the future  and how they feel less welcome in Britain  after the Leave vote.

The boroughs with the highest concentration of residents from another EU nation are Kensington and Chelsea (18.5 per cent) Haringey (16.8 per cent); Westminster (15.9 per cent); and Hammersmith and Fulham (14.8 per cent).

The research, by buying agents Garrington Property Finders, used 2011 census data to pinpoint council wards hosting the highest numbers of residents from each EU nation. These, it says, are the neighbourhoods most at risk of a slump in house prices and rents  particularly if the City is damaged by leaving the EU. It discovered:

Queens Gate ward in Kensington, close to the Lycée Francais, has the most French residents in London;

Germans are most likely to have homes in Ham, Petersham and Richmond Riverside, near the German secondary school;

The biggest Italian cluster is in the  St Marys Park area of Clapham;

Lancaster Gate ward in Westminster is home to more Spaniards than anywhere else in London.

Without swift action to reassure buyers, some areas could start to suffer purely from fear of the unknown. 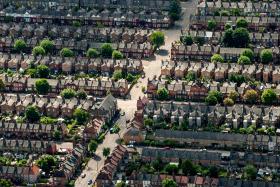 Spanish entrepreneur Elena Lopez, who lives in Docklands, said her future in London had been thrown into jeopardy by the Brexit vote. The 27-year-old first came to London aged 18 to work in a hotel and recently launched her first business, My Property Host.

She said: My savings are tied up in My Property Host and I have nothing to go back to in Spain. Ive worked hard to start my business.  I worry Brexit could jeopardise everything my business partner and I  have achieved.

Lower migration would mean fewer people hunting for accommodation so rental prices could take a dip. Many UK residents born in other EU countries are far more likely to be private renters. Fewer EU nationals moving to the UK may in the longer term have a marked impact on demand levels.