A new forecast predicts modest drops in house prices in 2017, with a recovery tipped in 2018.

House price growth has fallen in recent months but is expected to start rising again by 2018, according to the latest three-year housing forecast by Countrywide.

London and the South will experience the biggest falls, with house price growth slowing to 3.5 per cent in 2016 from 10.8 per cent in 2015, according to the new report by the UK's largest estate and lettings agents group.

These findings are similar to those of the Centre for Economics and Business Research (CEBR). Senior Economist Nina Skerosays: Although Brexit has certainly sent shockwaves, CEBR expects the housing market to slow down but not plummet.

The average asking price of a home in the capital is now £472,204, according to the latest ONS House Price Index.

Nationwide, house prices are still less than half the capital's average at £213,927 - and are also expected to be affected, albeit by not as much.

Price growth in the North and the Midlands, for example, is set to fall by 0.5 per cent in 2016 and experience negative growth of -0.25 per cent in 2017, as uncertainty surrounding the EU impacts investment and labour markets.

However, prices in these regions are also expected to pick up by two per cent in 2018. And to put the 2017 figures into context - this means values returning to levels similar to those seen at the start of this year.

"Forecasts in the current environment are trickier than ever as the vote to leave the EU has thrown up many risks," says Fionnuala Earley, Co 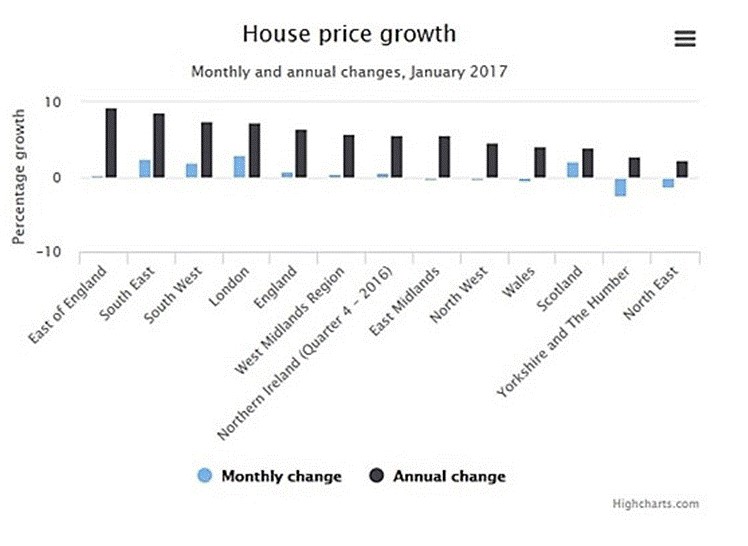 "Our central view is that the economy will avoid a hard landing, which is good news for housing markets."

Brexit is undoubtedly the biggest cause of uncertainty - June's vote to leave the EU immediately unsettled the housing market and data on the ratio of asking to achieved prices shows that buyers are already using this to negotiate on prices more fiercely than before.

The terms for exiting the European Union are still to be worked out, and despite the fact that favourable trade deals are in every nation's interests, financial analysts largely predict that the economy is likely to weaken once Article 50 has been invoked.

After several years of double digit growth, the stabilising of house prices is seen as a natural correction of the market. This was likely to occur without Brexit, as such large increases in price has resulted in weaker affordability.

There are also other factors at play - such as the Bank of England cutting interest rates to 0.25 per cent this month, keeping mortgages at record lows to incentivise people to buy.

"There's nothing to stop you if you're in a position to buy because house price fluctuations are modest," says Earley. "But don't try to rush into a purchase before prices increase again, buying is a longer term decision so you need to think about your personal circumstances - can you take on a mortgage and still have a life? Are your job prospects stable or changing?"

If you're looking for a first-time home and think that you may want to move on in a couple of years, Earley says buying near good transport links will always make a property more appealing to future buyers.

"Be aware it might take a little bit longer to sell your current property and there might be more price negotiation than expected - but then you can negotiate, too," says Earley. "Everybody is in a similar position if prices fall."

Prices in the prime housing market have been falling since 2015, due in large part to stamp duty increases and uncertainty surrounding the general election.

However, the fall in Sterling provides a cushion against perceived risks and makes multi-million pound property in the capital a more appealing prospect for overseas buyers, who still view London property as a stable investment.