The feud between Jeremy Corbyn and Sir Richard Branson has deepened as the Labour leader's most senior ally called for the Virgin tycoon to be stripped of his knighthood. 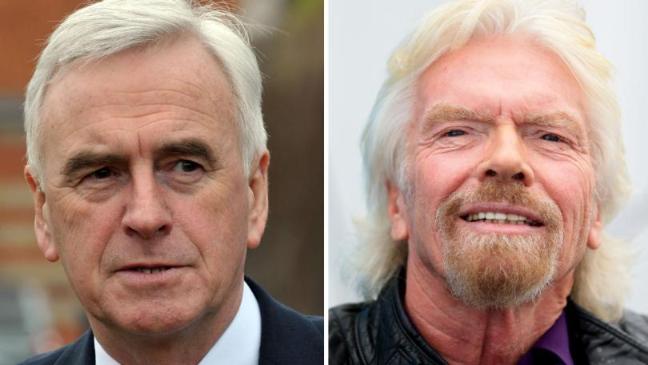 The feud between Jeremy Corbyn and Sir Richard Branson has deepened as the Labour leader's most senior ally called for the Virgin tycoon to be stripped of his knighthood.
Shadow chancellor John McDonnell hit out at the entrepreneur, claiming he wanted to "undermine our democracy" after Virgin Trains released footage disputing Mr Corbyn's claims about overcrowding on one of its services.
Meanwhile, Mr Corbyn and his rival Owen Smith set out measures aimed at tackling the housing crisis in the UK as the leadership battle intensified.
Mr McDonnell, who is running Mr Corbyn's campaign to be re-elected as Labour leader, demanded an overhaul of the honours system and also restated his call for former BHS boss Sir Philip Green to lose his title.
Writing in the Sunday Mirror, Mr McDonnell said Sir Richard was a "tax exile who thinks he can try and intervene and undermine our democracy".
The row between Sir Richard and Mr Corbyn erupted after Virgin Trains released CCTV images that appeared to show the Labour leader walking by vacant, unreserved seats before he was filmed sat on the floor complaining about crowded carriages.
Mr McDonnell said: "The whole purpose of the honours system is undermined when the rich and the powerful can collect their gongs without giving anything back. It's even worse when tax exiles are given honours."
He added: "It should be a simple choice for the mega-rich. Run off to tax exile if you want. But you leave your titles and your honours behind when you go."
A spokesman for the shadow chancellor said: "John believes that it should be for Parliament to ultimately decide who is or who is not stripped of their title, if enough members of the public campaign for it.
"But he would not support tax exiles or businessmen who mistreat their employees retaining their titles."
Labour MP John Woodcock, a prominent critic of the leader, mocked Mr McDonnell's call, saying: "Dare to question Saint Jeremy's version of the truth? John McDonnell will strip you of your knighthood."
In an effort to put the focus back on policies, Mr Corbyn's team released details of his plans to meet the UK's housing crisis.
Papers reported in The Observer show a Labour government run by Mr Corbyn would borrow £15 billion a year to build houses across the country - half of them council homes - as part of a £500 billion programme of public investment.
A Corbyn administration would aim to build one million homes during a five-year parliament and introduce new safeguards for tenants.
The policy papers suggest that the net cost to the public sector will be £10 billion a year, because two-thirds of the construction bill would be labour costs, meaning extra tax revenues for the Treasury, the newspaper reported.
Mr Smith visited a soup kitchen in Brixton to highlight his policies aimed at eradicating homelessness.
Pointing to figures showing 3,659 people were sleeping rough last year, Mr Smith's camp said he would eradicate the problem as part of his plan to build 1.5 million homes.
Mr Smith's plan would also involve creating a rough sleepers' fund of at least £50 million a year for local authorities to deliver outreach programmes and setting up a single government unit to co-ordinate action across the country.
The Labour leadership hopeful said: "The doubling of rough sleeping over the last six years is a moral scandal.
"The thousands of people forced to sleep on our streets is the ultimate indictment of the Government's austerity programme and failure to tackle the housing crisis.
"Behind these figures are stories of ordinary people whose lives have fallen apart. People who have been let down by a callous Tory government that has taken away the support they need; at the very time they need it the most.
"A Labour Party led by me will fight to tackle the housing crisis and end the scandal of rough sleeping once and for all."
http://home.bt.com