These charts show just how unequal the UK's housing market is

House prices have increased 5.8pc in the past 12 months, according to Halifax. But behind the headline figure there is remarkable variation in affordability and price increases.

New analysis of data by the Office for National Statistics of the housing market in the past few years has revealed just how stark the inequality of rents and house prices is within the country.

At the top of the list of unaffordable areas is London, where house price growth has eclipsed all other areas at a rate of 551pc since 1995. This is compared to 208pc in the north-east of England and 235pc in Wales.

That gap has become wider over time, with house prices increasing by 9.6pc in London between 2014-15 and by 5.5pc in the North East.

This has been set against the least affordable local authority, Westminster, where last year the average home was 23 times greater than median gross annual salary.

The affordability ratio for nd Wales has remained largely constant since 2009, but Westminster's has climbed, as house prices have soared and salaries there have not.

London's runaway housing market has also hit rents. In 2015, there were three local authorities where the average rent was over £2,000 per month: Kensington and Chelsea, Westminster and the City of London. In Westminster, this represented 73.4pc of median monthly salary.

The areas with the lowest average rents were Kingston upon Hull, at £395, and Burnley, at £400 per month. 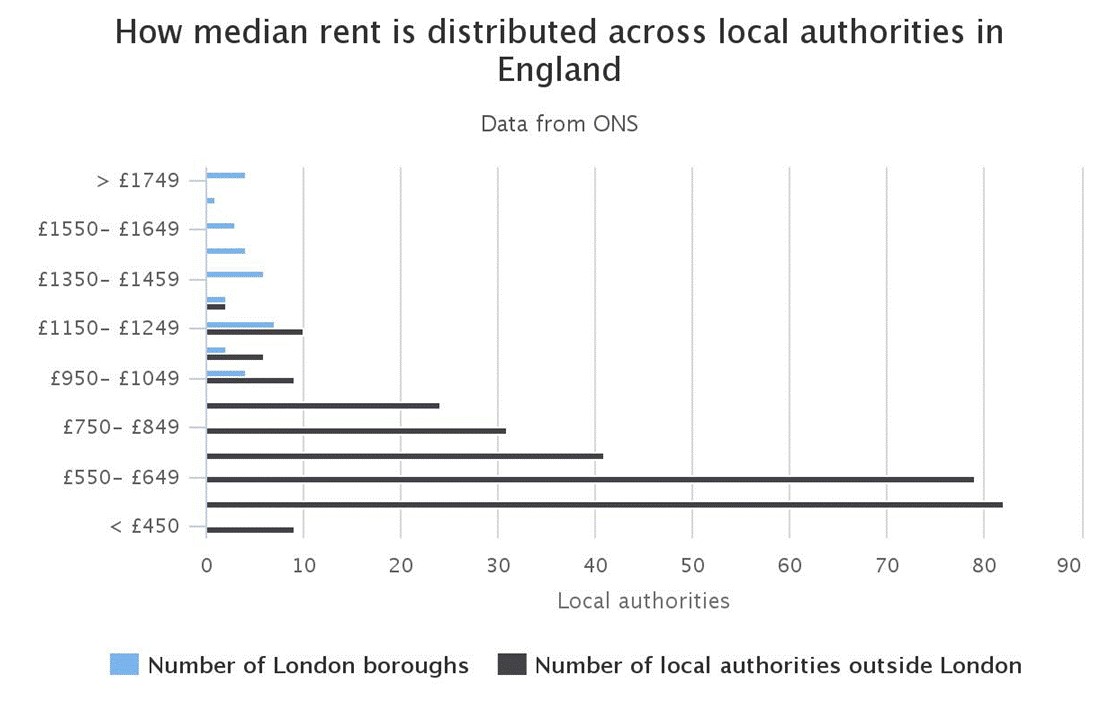 The separation between the north and south of England when it comes to unaffordable rents is highlighted by this map. House prices in major northern cities, however, are set to rise higher than those in the south, many of which have reached a threshold and become unaffordable.

Where monthly rent is the highest and lowest percentage of salary

Part of the reason for this is that the amount of social housing is going down as tenants purchase their homes using Right to Buy, but these are not being replaced quickly enough.

The Government has pledged to replace them, and Theresa May has claimed that this promise has been met. But official figures suggest that they are not keeping up: just one in 10 have been replaced between April 2012 and the end of 2015.