Property predictions: what does 2017 have in store for the housing market? Will the housing market soar or suffer over the next year

It has been a challenging year, from the seemingly unprecedented number of celebrity deaths to the shock results of major political voting events  and it hasnt been much smoother for the property market.
In April, the stamp duty threshold for buyers of second homes or buy-to-let properties was lowered to £40,000 and a 3pc surcharge was introduced.

By November, these changes had brought in half as much money as the Treasury expected and were blamed for a steep decline in property sales, at a cost of nearly £1 billion to the UK economy.

Then there were the months of uncertainty surrounding Brexit, the UKs decision to leave the European Union, which sent share prices and profits of many estate agents and housebuilders tumbling.

One property index, Hometrack, showed that house price growth in London has slowed to its lowest rate in more than three years, while Savills said that the number of 25-year-olds who own their own home has more than halved in the last 20 years.

I think it is fair to say that, for many reasons, 2016 is not going to be remembered fondly by many, said Marc Langdon, partner at property consultancy Bidwells.

While housing has rebounded more strongly than expected after the Brexit referendum, the level of transactions has dropped considerably and we move forward with a fear that growth in 2017 will be notably slower than the previous 12 months. 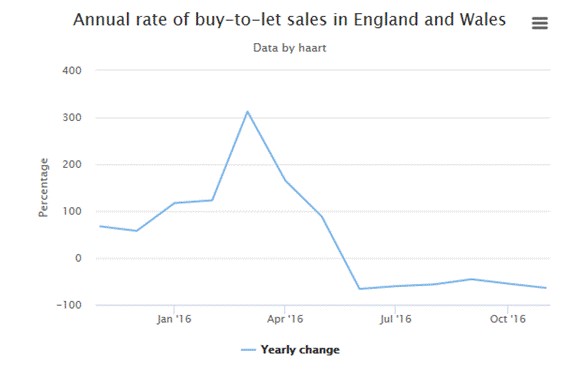 So what else does the year ahead have in store for the UK housing market?

Much like 2014, 2015 and 2016, the UK will begin the new year with an opaque and uncertain future ahead, said Jake Russell, director at Russell Simpson, the boutique Prime Central London estate agent.

Much like 2014, 2015 and 2016, the UK will begin the new year with an opaque and uncertain future ahead
As with the Scottish referendum, the general election and the EU referendum, the forthcoming year will be dominated by yet another landmark political event in the triggering of Article 50. As with any trading market, uncertainty breeds caution and indecision, and as such we can expect continued low levels of activity.

The agency said it expects minimal to zero growth to prime property prices in 2017, while luxury developer Banda Property said prime central London prices could drop by 1pc over the next year.

Londons golden postcodes are in stalemate going into 2017, said Louisa Brodie, head of search and acquisitions at Banda, adding that these areas should still expect to see values increase by 15pc to 18pc over the next five years. Chancellor Philip Hammond is under pressure to reverse his predecessor's work

Other have higher hopes for the next 12 months, as the market adjusts to the new normal and buyers take advantage of low interest rates.

History suggests years of low transactions are almost always followed by years of increased activity
Nationwide, house prices are predicted to rise by 3pc over 2017, according to the Royal Institution of Chartered Surveyors (Rics), with East Anglia, the North West and the West Midlands recording higher gains than the national average. The supply pipeline or lack of it is at the forefront of the analysis and dominates the residential market, Rics said.

Predictions are a fickle thing, but 2017 is unlikely to give the property market a much easier ride than it has this year.

From the Housing White Paper expected in January, which promises to set out radical plans to boost housing supply, to the last Spring Budget in March, at which the Government is facing pressure to reduce stamp duty  not forgetting the expected triggering of Article 50 shortly thereafter  it seems fair to say that the year ahead will have its fair share of market-moving events.