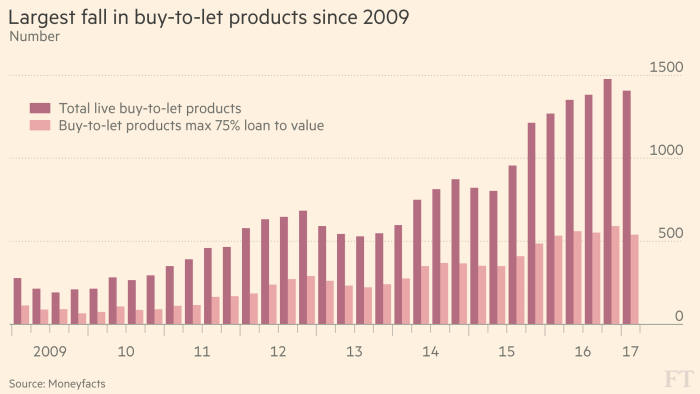 It shows the amount of buy-to-let mortgage products on offer from lenders since 2009. The number of deals available to landlord investors has risen from 278 in January 2009 to more than 1,400 today. Why does this matter? The market for buy-to-let loans has expanded rapidly in recent years as investors looked to put their money into bricks and mortar assets that produced an income (rent) as well as capital growth (via house price rises). Lenders responded by offering an increasing number and variety of deals to feed this competitive market. However, regulatory and tax changes have made the climate far less conducive to buy-to-let. In January, the Bank of England imposed affordability requirements on landlord lenders for the first time, to ensure they would be able to pay the mortgage even if interest rates climbed as high as 5.5 per cent. Along with the toughening of affordability rules, from April borrowers will find the Treasury much less generous in the amount of tax relief it offers on mortgage interest payments. For buy-to-let owners, this is to be phased out for higher-rate taxpayers over four years to 2020, leaving a maximum relief at the basic 20 per cent rate. So should we expect the numbers to fall? They already have, according to Moneyfacts, a finance website that compiled the figures. It reported that 74 deals had been withdrawn in the space of a month  the sharpest monthly fall since 2009  underlining the lack of appetite among lenders for highly leveraged deals where borrowers will struggle to make their sums add up.

Charlotte Nelson of Moneyfacts said: With the new rules reducing the amounts landlords will be able to borrow, it is little wonder that the 75 per cent loan-to-value sector has seen the largest reduction in product numbers, falling from 606 to 540 in just one month.But the number of available loan deals still seems high in historic terms.Quite. The chart shows how there are still about five times as many deals on offer as there were in 2009. And while some deals have been disappearing, some specialist buy-to-let lenders have also been introducing types of mortgage that address the emerging constraints in the sector. Adrian Anderson, director at mortgage broker Anderson Harris, points to a buy-to-let mortgage offered by lender Precise Mortgages, where higher-rate taxpayers will have to show that rental income will meet 145 per cent of mortgage interest payments while basic rate taxpayers are required only to meet the industry standard of 125 per cent  both stress-tested under 5.5 per cent interest rates.

Could some borrowers struggle to remortgage when their fixed rate deals run out? In theory theres no obligation on lenders to apply more stringent rules as long as landlords do not increase the amount they are borrowing when remortgaging. In practice, some mortgage brokers fear lenders will not take up this exemption, leaving some highly leveraged borrowers languishing as so-called mortgage prisoners, unable to find an available deal at similar or affordable interest rates. Mr Anderson said high value buy-to-let mortgages that were soon coming up for renewal would prove harder to place as the amount a landlord could borrow had shrunk. This could mean paying a higher rate of interest, which will become even more of an issue when interest rates start to rise, he said.


Copyright    The Financial Times Limited 2017. All rights reserved. You may share using our article tools. Please don't cut articles from FT.com and redistribute by email or post to the web.