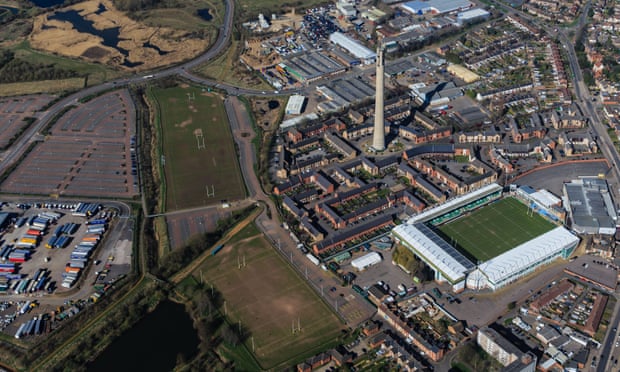 Asking prices in Northamptonshire have jumped by 9.1% in the past year, with Northampton (pictured) less than an hour from London by train. Photograph: High Level/Rex/Shutterstock

Asking prices for homes in Northamptonshire have jumped by 9.1% over the past year, the biggest increase in England and Wales, Rightmove said today, as Londons unaffordable property market has driven people to buy further away and commute.

The property website said the asking price for homes coming on to the market in the county had risen by 2.2% in August, to an average of £256,642, making it the hottest area covered by the survey. The growth contrasts with a monthly fall of 1.9% in Greater London, and a 0.9% drop across England and Wales as a whole.

Rightmove said counties across the middle of England were experiencing a mini-boom. Prices in Derbyshire rose 7.9% from a year ago and in Norfolk they were up 7.4%. Annual prices increased by about 7% in Nottinghamshire, Bedfordshire, Worcestershire, the West Midlands and Leicestershire. Yet they remain much lower than in London where, although the annual rise was only 1.6%, the average new asking price stands at £629,270.

Miles Shipside, Rightmove director and housing market analyst, said: The heat has come off much of the market. A combination of traditional summertime price blues and the chill of uncertainty in the air has cooled house price growth in some parts of the country and affordability remains very stretched.

Years of rapid price increases have made London and the south unaffordable to many buyers, prompting them to look further afield. It takes less than an hour to travel from Northampton or Bedford to central London by train, while cities such as Birmingham and Norwich have buzzing business scenes.

Analysis Too much hinges on house prices: but Britain may yet avoid a crash

The whole economy moves when the property market moves. This is hardly a desirable state of affairs, but we are not in for a re-run of the 1990s slump
Read more

Shipside pointed out that the average house price in Derbyshire of £200,000 was less than a third of the average London price. He said property investors were turning their attention to the Midlands from London to get better returns.

He said: With a shortage of suitable choice in many parts of the country, buyers are becoming increasingly adept at hunting down property that fits their budget. High demand and limited supply are still driving momentum, especially in the counties in the middle of the country.

Adam Wellesley, director of Horts estate agents in Northamptonshire, said the rise in prices was likely to be down to the close vicinity for commuters to get to London Euston, as you can now get there within 48 minutes.

He said: You can also get to Milton Keynes by train in 10 minutes, where prices are 20% higher than Northampton. Wellesley said the buy-to-let market was also buoyant, as investors were still managing to make returns of up to 10% on houses of multiple occupancy.

Despite concerns about Brexit and the economy, house prices have continued to increase, though at a slower pace than in recent years. The market has been supported by a lack of supply and ultra-low interest rates, though the Bank of England has warned lenders about loose mortgage lending.

Get the whole picture from a source you trust, emailed to you every morning
Read more

By the end of the year, Countrywide expects prices to have risen by 3.5% in the east of England and 2.5% in the Midlands and north-west, while in greater London they will have flatlined and in central London they will be down by 1.5%. Bucking the trend will be prime central London  in the capitals costliest neighbourhoods, it said prices could grow by 2% after two years of falls.

Countrywide predicted that across Great Britain house-price growth would fall to 1.5% this year from 5% in 2016 and that the market would wane early next year as economic conditions weaken and confidence is guided by Brexit talks.

Fionnuala Earley, Countrywides chief economist, said rising prices and interest rate increases would sap household spending power in the first half of next year, but after a rocky start growth would resume as wages start to rise, pushing prices up by 2% in 2018.

However, she said: The housing market is sensitive to confidence, which will be affected by the outcome of Brexit negotiations.

Earley said there are not enough new houses in the pipeline to meet expected demand and that lack of supply would continue to support prices over the next two years. Annual price growth would accelerate to 3% in 2019 , she predicted.