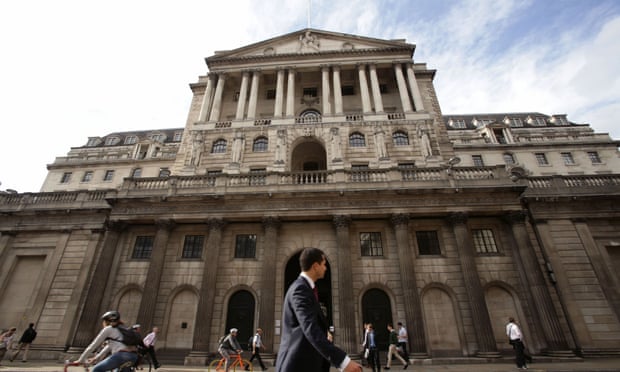 Bank officials said they pressed ahead with the increase in an attempt to protect households from inflation that has risen since the Brexit vote. Photograph: Yui Mok/PA

The Bank of Englands 0.25% rate rise sent the pound tumbling on foreign exchanges as gloomy forecasts for growth appeared to rule out the prospect of steep increases in the cost of credit before 2020.

Analysis What the interest rate rise will mean for you

Sterling dropped more than 1% to $1.30 and the euro climbed by a cent to nearly 1.12 in response to a signal of a more limited increase in interest rates over the next two years than Threadneedle Street indicated in the summer.

Traders sent the FTSE 100 to within a point of its previous record closing high in anticipation of the largest firms list on the stock market reaping the benefits of the lower pound. The market hit 7,555, up almost 1%.

The FTSE 100 was helped by the plunge in the pound, said David Madden, a market analyst at CMC Markets. Among FTSE-listed companies that earn much of their income in euros and dollars, miners BHP Billiton, Rio Tinto, Antofagasta rose between 2.4% and 2.7%.

Bank officials said they had pressed ahead with the first increase in interest rates for a decade in an attempt to protect British households from inflation that has risen since the Brexit vote.

The move was widely expected after a series of speeches in recent months by members of the Banks interest rate setting committee in favour of an increase despite a slump in GDP growth and the likelihood that inflation would fall next year without a rate rise.

The Banks governor, Mark Carney, said inflation was likely to remain close to its 2% target as even modest wage rises forced up prices in the shops.

He said the Brexit talks were likely to be the biggest factor for the next move on rates, either up or down. Were going to be in exceptional circumstances for a period of time, certainly until theres clear resolution of the future relationship [with the EU], and even then, maybe longer than that, he said.

He said the novelty of a first rate hike in 10 years created some uncertainty about its impact on the economy, though there was no reason to expect this to be larger than on previous occasions.

Business Today: sign up for a morning shot of financial news

The Banks central forecast in its November inflation report signalled two more 0.25% percentage point rises in the next two years, capping the base rate at 1% by 2020.

Two members of the nine-strong monetary policy committee voted to keep rates at 0.25% - Sir John Cunliffe and Sir Dave Ramsden. They said: There was insufficient evidence so far that domestic costs, in particular wage growth, would pick up in line with the inflation reports central projection.

Alan Clarke, an economist at Scotia Bank, said: These comments confirm to us that wage data will be absolutely crucial in the early months of 2018 in dictating how soon the next rate hike can be expected to arrive.

Amit Kara, the head of UK macroeconomic forecasting at the National Institute for Economics & Social Research, said the economy had recovered strongly in the wake of the Brexit vote and justified interest rates reaching 2% by the middle of 2021.

He said the low pound would continue to encourage a surge in exports and, with it, an increase in high-priced raw materials, forcing the Bank into a more severe clampdown on inflation.

The rise comes after the consumer price index (CPI) measure of inflation hit 3% in September and is expected to rise further, driven by the pounds fall since the EU referendum. The Bank is mandated to target CPI at 2% to prevent the economy from overheating.

Further rises in rates are expected to support the value of the pound, but it also raises borrowing costs for consumers and businesses through increased payments on mortgages and loans. That could curtail consumer spending and make it harder for businesses to borrow to invest, which in turn could clip the rate of economic growth just as Britain requires a shot in the arm during the Brexit process.

The MPC noted that business investment was being affected by uncertainties over the countrys withdrawal from the EU. The Bank predicated its forecasts on a smooth adjustment to a new trading relationship, meaning that a hard, disruptive Brexit could throw its plans off course.

Threadneedle Street had been warned against increasing interest rates as storm clouds gathered because of rising inflation, weak wage growth and uncertainty over Brexit. High street sales are falling at their fastest rate since the height of the recession as households put the brakes on spending in response to higher prices and sluggish earnings growth.

Despite historically weak levels of business investment, the Bank said further growth should come as firms benefit from the weakness in sterling and the global economy picks up pace, providing potential export opportunities for British firms. A higher contribution to GDP growth from exporters could help to offset weaker consumer spending.

Fears that Brexit could derail the economy remain a major concern. The Bank found uncertainties associated with Brexit were weighing on domestic activity, which had slowed even as global growth had risen significantly.

The vote to leave the EU constrained the speed at which the UK could grow before prices began to spiral, according to the Bank, which said that the growth potential of the economy had been clipped below the levels it was able to achieve in previous years. The UK recorded a growth rate of 0.4% in the three months to September, much lower than the US and eurozone during the same period.